We live in the Information Age, but do our economic indicators? Does GDP capture the outputs of every new technology, especially when so many new technologies seemingly charge nothing for their use? And how does paying attention to GDP over other measures affect economics, policy, and society?

A closer look is needed.

Hidden value
GDP has long ignored many value-creating activities like parenting. Such a value, though, is likely to be relatively constant over centuries. But recently, as more value arises from computers, the Internet, and information proliferation, GDP may not be measuring a huge economic shift. Take a look at the make-up of GDP over the period in which the Internet and computer use became mainstream: 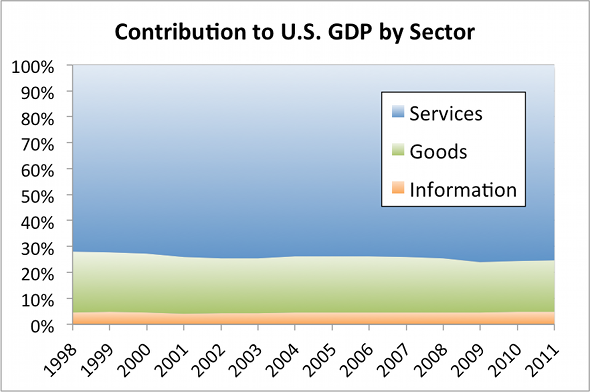 The percentage of GDP added by information, communications, and technology-producing industries has remained remarkably constant, hovering around 4%. This, while the number of Internet users increased from 36% of the population to nearly 80% -- while our society transitioned from yearbooks to Facebook, newspapers to iPads, and mail to Gmail. This is the "Clothesline Paradox," explained well by Tim O'Reilly:

You put your clothes in the dryer, and the energy you use gets measured and counted. You hang your clothes on the clothesline, and it "disappears" from the economy. It struck me that there are a lot of things that we're dealing with on the Internet that are subject to the Clothesline Paradox. Value is created, but it's not measured and counted. It's captured somewhere else in the economy.

O'Reilly argues that GDP is good at measuring value capture instead of value creation. As an example, take Japan. Since 1989 the country has averaged GDP growth of 1%, which earned the intervening era the nickname "the lost decades." But even though GDP was slow to grow, life expectancy and trade increased -- along with, arguably, the overall quality of life in the country. While Japan's GDP demonstrates a slightly-better-than-stagnant economy, plenty of other measures paint a different picture.

Capturing versus creating
Those companies that have captured some of the value of the Information Age have performed spectacularly. Companies that have failed to transition are fighting to hold on to traditional revenue streams, and GDP might become distorted as a result. Look at News Corp. (FOXA), which recently threatened to pull its over-the-air broadcasts and move to cable because of a start-up, Aereo, that captures its broadcast with small antennas and streams the content wherever a user might be. News Corp. typically captures value through fees for rebroadcasting its content, but Aereo disrupts that revenue stream, and although News Corp. still creates the content, Aereo collects the value. The measured GDP value of those rebroadcasting fees disappears and may not be totally recaptured or built upon by Aereo, because Aereo gives away a limited version of its service for free.

The bulk of the value of Linux to IBM was created by this small team of Linux developers, but most of the value was subsequently captured by the product and service businesses which saw incremental revenue by supporting Linux.

We treated the Internet and Linux as platforms for innovation across the whole company. And, while much of the value was created by the small teams focused on developing the new initiatives, the bulk of the value was captured by the existing IBM business units. In the early years of the initiatives, they saw incremental revenues from supporting the new capabilities with their existing offerings. And, over time, they came up with all kinds of new products and services based on the growing marketplace presence of the Internet and Linux.

The debate over using GDP has been around as long as the measure itself, but with more of the economy based on digital goods and services, the calls for a redefined measure are mounting. Our economic policies target GDP growth, so we should have an understanding of just what GDP may be missing. Because any economic activity that's not accounted for slips past taxes, solving for a new measure could help sustain reasonable government budgets. And because GDP may undervalue innovation, a new measure could inspire more breakthrough ideas that may not have contributed to the current definition of economic growth.