It turns out that employees are useful to keep a business running.

A recent article in Bloomberg Businessweek highlighted a problem that should be obvious to many: Cutting costs by laying off employees eventually starts to be counterproductive and hurts the business. There's trimming the fat, which can be good for a business and improve efficiency and profitability, but past that you're just cutting into the muscle and bone, which is what the article suggests Wal-Mart (WMT 1.40%) is doing.

Dieting too far
The problem is that Wal-Mart has continued to increase its store presence over the last five years, but has only barely increased the number of employees staffing those stores. Wal-Mart opened 3,511 new stores globally between 2007 and 2012, increasing its total square footage by 23%, but only increased its workforce by 5% during that time. As a result, stores are having trouble keeping shelves stocked, and customers are taking their business elsewhere.

This is a topic near to my heart, as I've found that Safeway (NYSE: SWY) suffers the same problem. It's not uncommon for my local store to have one employee running the register, with a half-hour-long line snaking all the way to the back of the store, and merchandise simply sitting in crates in the aisles. On a hunch, I compared the number of employees per 1,000 square feet at various stores, and the results are not surprising:

Costco and Whole Foods have increased, or at least held steady, the number of employees staffing their stores, while Safeway and Wal-Mart have both had a sizable drop. Long lines and empty shelves will ultimately encourage customers to go to better-staffed competitors, and that seems to be exactly what has happened over the last few years. Costco and Whole Foods have both dramatically increased sales, while Safeway and Wal-Mart have lagged significantly.

The looming threat
But there's one company that hasn't been mentioned yet that has increased its employment far more than even Costco or Whole Foods, and has increased its sales by far more as well. This company has the same sell-everything approach to retail that Wal-Mart and Costco have, and, like Wal-Mart, has been branching into grocery over the last few years, but it has significantly less floor space to keep stocked.

If you guessed Amazon.com (AMZN 2.45%), you are correct! Amazon increased its labor force from 17,000 employees to 88,400 from 2007 to 2012, and while it doesn't have store shelves to stock or front-end registers to run, it does have rapidly growing sales that require more warehouse personnel, more customer service representatives, and other employees to keep things running smoothly. 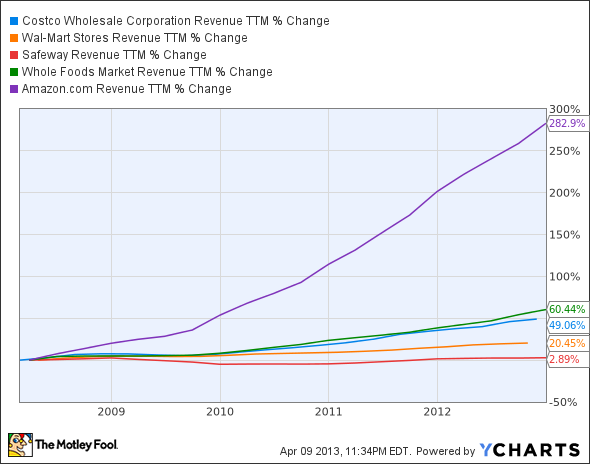 Amazon presents the real threat to inefficient retailers. A customer might be willing to just try Wal-Mart another day, rather than drive all the way to Costco to see if it has an out-of-stock item, but why even do that when you can just buy the item on your phone on your way out of the store, and have it on your doorstep in two days?