A decade from now, Starbucks will still be wowing investors.

There are a precious few companies that you can buy and forget about for a decade or two. Starbucks (SBUX -0.95%) happens to be one of those companies, dominating the coffee market like no one else can.

Trouble for the competition
One sign of a great brand and quality products is when competition can't keep up, even in locations where they should have an advantage. I live in the heart of Caribou Coffee country, and even here Starbucks is a more prevalent and compelling brand. On the University of Minnesota campus, where coffee addictions are ingrained for life, Starbucks is the only coffee available. Target is also headquartered here and it has a partnership with Starbucks, not the local Caribou.

Caribou is a decent company with more creative and quirky drinks, but it doesn't have the same national draw as Starbucks. It's a regional player, not a global phenomenon, and that's one reason it's closing or rebranding 168 of its stores.

There are dozens, if not hundreds, of these smaller competitors, but Starbucks still commands a presence, even when regional players are around. You can't help but want to own a brand like that.

From every corner to every counter
Now that Starbucks is on seemingly every corner in the U.S. and very prevalent internationally, the challenge is finding new growth. Luckily, most coffee drinkers don't simply get their fix at Starbucks; they drink coffee at home as well.

About half of Americans drink coffee, consuming 400 million cups per day, and most of those cups come from somewhere other than Starbucks. The company serves 70 million customers per week worldwide, so even if we assume every one of those customers is in the U.S. and ordering one cup, the company would have a 2.5% share of the overall coffee market here. It's likely far less than that, so there's still huge potential for Starbucks domestically as well as globally, which is good for the stock.

The Verismo single-serve line is Starbucks' effort to move beyond stores and get onto every counter, battling Green Mountain Coffee Roasters' (GMCR.DL) success in this market. Over the past five years, Green Mountain has grown faster than Starbucks because of its presence in the home. 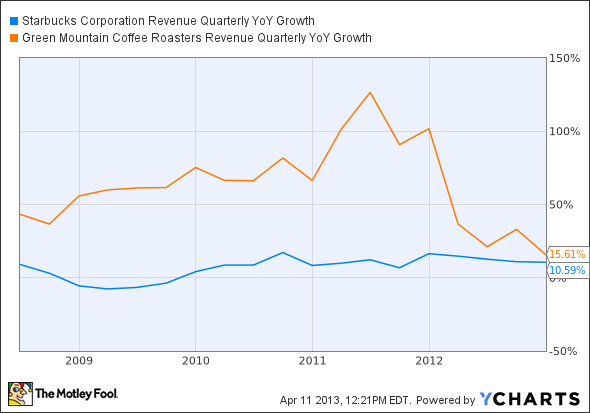 If Verismo is a success, the great thing about single-serve is that once a customer buys the machine, you have a cash flow generator in their home. Starbucks can even expand to teas and other drinks from within the home.

Eyes on the tea market
Starbucks is also trying to diversify beyond coffee. Someday coffee may not be the desired hot drink of choice; people may choose tea instead. That's why Starbucks is rapidly expanding Teavana, its tea concept.

It's also adding fruit drinks in the Evolution Fresh brand, responding to customer desires. The bottom line is that Starbucks is responsive to consumer trends, even when they move beyond coffee.

In Starbucks stock, you get what you pay for
Just like any Starbucks coffee, Starbucks' stock isn't cheap, and here lies the challenge. Starbucks stock trades at 32 times trailing earnings and 22 times forward earnings. I would normally say that's expensive, but by Starbucks' standards it's relatively cheap. 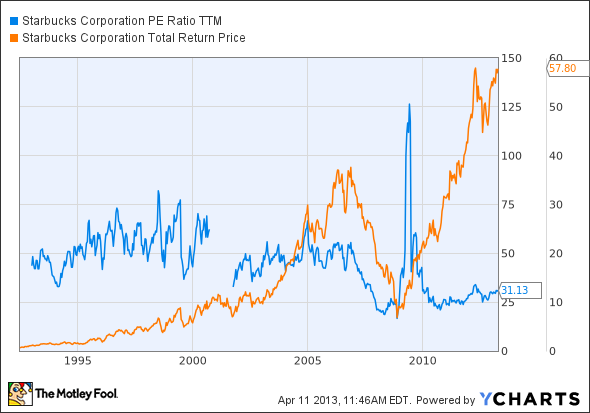 Paying a high price for Starbucks hasn't hurt investors in the past, and if growth continues, it won't in the future. There are headwinds like sheer size and changing consumer trends, but in a decade or two, Starbucks will still be a strong brand, and I think investors will be rewarded for owning it.