Earlier this week, I finally added Whole Foods stock to my personal portfolio. Here's why.

Over the past two decades, organic grocer Whole Foods Market (WFM) has quietly proven itself to be one of the most incredible growth stories our stock market has to offer.

Take a look at what Whole Foods stock has done for investors since its IPO in 1992: 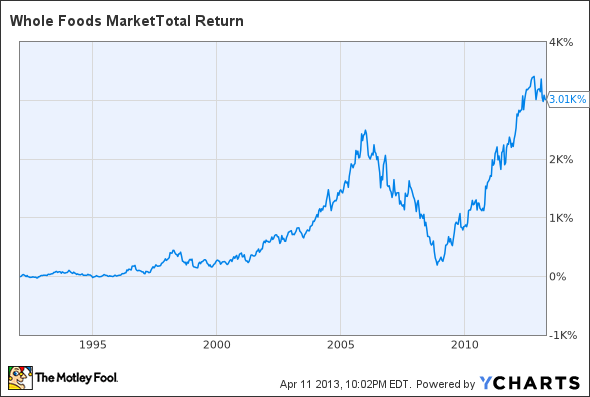 And, no, that "K" isn't a typo. Including dividends, Whole Foods stock has indeed helped early investors return more than 30 times their money.

Lately, however, many are wondering whether the stock has already seen its best days, especially after the shares dropped like a sack of potatoes following the release of the company's less-than-stellar fiscal first-quarter results back in February.

So why buy now?
As a result, you might be wondering why I finally decided to add shares of Whole Foods Market to my personal portfolio earlier this week. After all, haven't we already missed the party?

As I pointed out two months ago, the quarterly results weren't all that bad. In fact, the company remains solidly profitable, and still expects sales growth for 2013 to come in between 10% and 11%. Short-term oriented traders, however, weren't too keen on the fact that it was a decrease from the 13.7% growth achieved in 2012.

Curiously enough, the primary culprit for the miss lies in Whole Foods' insistence on focusing more energy on value-oriented items to broaden their consumer appeal. As fellow Fool Joe Tenebruso noted recently, "Whole Foods is a company that is doing well by doing good," and fast-becoming a "lifestyle brand" where people want to shop. Why? Because they trust its quality, enjoy the experience, and believe management when they say the company wants to make a positive difference in the world.

In short, Whole Foods is about as Foolish (with a capital "f") a company as they come, and any investor can feel great about owning its stock.

What's more, Whole Foods management plans to increase the total number of domestic stores to 1,000, or nearly triple the 345 total locations it currently maintains. If that sounds aggressive, consider that grocery giant Safeway (NYSE: SWY) currently has more than 1,600 locations, and the behemoth SUPERVALU (SVU) boasted more than 5,000 stores at the end of last year. Compared to both Safeway and SUPERVALU, at least, Whole Foods has plenty of room to grow -- and plenty of market share to grab along the way.

As it stands, Whole Foods is currently building around 10 new units per quarter, so it's safe to say that today's investors can still enjoy many years of steady, predictable growth going forward. And thanks to its strong free cash flow and cash and investments of $1.2 billion at the end of last quarter, the company should have no problems financing both its expansion and $0.20-per-share quarterly dividend.

As usual, this is a long-term play for me, so I fully intend to hold Whole Foods stock in my portfolio for at least the next decade. If you do the same, I'm convinced you'll be more than satisfied with the end result.