Please ensure Javascript is enabled for purposes of website accessibility
Log In Help Join The Motley Fool
Free Article Join Over 1 Million Premium Members And Get More In-Depth Stock Guidance and Research
By Dan Caplinger - Apr 13, 2013 at 11:00AM

The two big telecoms in the Dow have done better than their competitors.

The Dow Jones Industrials (^DJI 1.06%) includes stocks from a number of different industries, including health care, financials, energy, tech, and consumer stocks. But if you want the highest dividends the Dow has to offer, then you'll want to take a closer look at the average's telecom stocks.

Telecoms are an important part of the Dow because they represent the average's only exposure to a business model that resembles what utility stocks charge. Telecoms spend huge amounts of capital to build out their respective networks, and then sit back and collect monthly subscription fees from millions of customers. Let's look at how the two Dow telecoms have fared so far in 2013 and what their prospects are for the rest of the year and beyond. 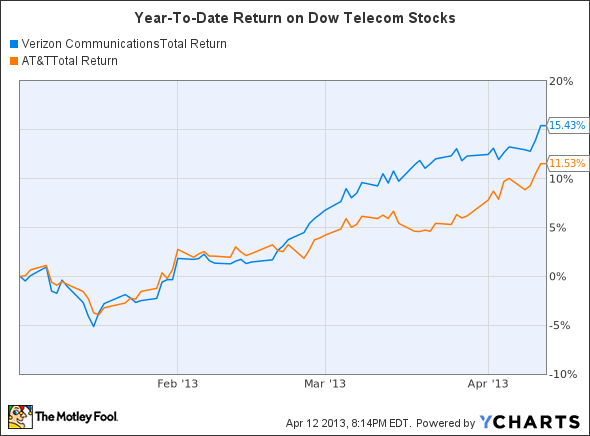 Much of the solid total returns that telecom stocks have produced over the years have come from dividends. Both AT&T (T 0.09%) and Verizon (VZ 0.43%) have dividend yields above 4%, with AT&T having led the Dow in terms of yield for a long time. The beauty of the basic telecom business model is that after investing tens and even hundreds of billions of dollars in developing an infrastructure for its services, the cost of every incremental customer that walks in the door is negligible, leading to almost pure profit when Verizon and AT&T are able to increase their customer counts.

Until recently, it looked as though the two Dow telecoms would be able to create an effective duopoly in the U.S. market, leaving other companies to fight for the scraps that they left behind. But Sprint Nextel's (S) renaissance from the support of Japan's SoftBank has thwarted that outcome, making the No. 3 carrier a legitimate player once more and giving AT&T and Verizon a run for their money. Nevertheless, Sprint has a lot of work to do before it can hope to catch up to its larger rivals.

Increasingly, telecoms have pushed for revenue-enhancing initiatives with smartphone customers. For instance, just yesterday, Verizon lengthened the waiting period on its upgrade policy from 20 months to 24 months. The eventual goal, though, will be for Verizon and AT&T to stop offering subsidies on mobile devices entirely, thereby helping them avoid the hit to earnings that they take every time a major new smartphone launch occurs -- especially launches involving the iPhone.

Will telecoms keep up their dividends?
The mobile revolution has made demand for high-speed wireless data network access nearly insatiable, and both AT&T and Verizon appear to be in prime position to sustain and build on their respective past successes. As long as both companies remain well ahead of the pack, both of them should be able to keep their monthly charges high and produce the cash flow that has kept their shareholders happy for years.