First Solar made some big moves this week in solar.

This week, the solar industry went through a number of interesting changes, and at least one company may have altered its future for the better. Most solar stocks were higher this week, but it's been a topsy-turvy month in the solar industry because investors don't know whether companies are coming or going. 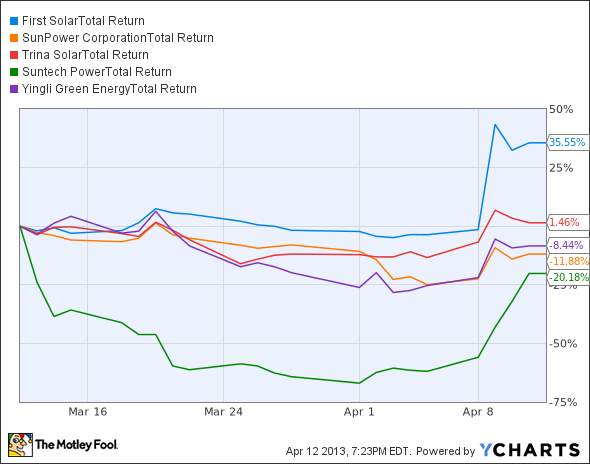 At the end of the day, a lot of these movements are noise, and investors should still be looking for differentiated companies with strong balance sheets that can survive long-term. Who made moves in that direction this week? Let's get to it.

Better than expected
First Solar (FSLR -0.70%) didn't kick off earnings season, but it gave a sneak peek for 2013 by giving guidance this week. The company expects sales of $3.8 billion to $4.0 billion and earnings of $4.00 to $4.50 per share. That was well above expectations and sent shares nearly 50% higher on Tuesday.

Getting into the high-efficiency market
First Solar also made a few huge moves this week to shore up its technology and module efficiency. On the thin-film side, the company increased its efficiency road map to 14.9% efficient modules by the end of next year and 17.2% by the end of 2017. Its current modules are only 12.9% efficient at capturing sunlight, and with most Chinese modules operating around 15% and SunPower (SPWR -3.14%) offering production panels at 21.5% efficient, the thin-film module is falling behind from an efficiency standpoint.

The new road map is aggressive, but First Solar has one of the best research and development teams in the industry, and I think it has a good chance of reaching these goals. What may matter more than First Solar's progress in thin film is how quickly crystalline silicon modules are able to increase efficiency over the same time frame. As I said, SunPower is already producing modules at 21.5% efficiency, and this year GT Advanced Technologies (NASDAQ: GTAT) is introducing equipment it says will increase crystalline cell efficiencies by 4% or more to more than 22% efficient (about a 20% efficient module).

The entire industry is pushing efficiency higher every year, and for First Solar's CdTe modules to stay relevant in the utility space, where they're primarily used, they need to keep pace. This is a step in the right direction.

Getting into enemy territory
The other big move by First Solar was the acquisition of TetraSun, a 14-person start-up with technology it claims can build 21% efficient solar cells at the same cost as less efficient cells. The idea is that First Solar will be able enter the commercial and residential solar space with higher-efficiency modules.

There's a lot of risk in this move, because TetraSun's technology isn't proven in mass production, and it's the scale-up phase that has sunk countless solar companies. The cost and efficiency claims are also just claims until manufacturing begins some time in 2014.

I like the move into higher-efficiency modules by First Solar, but a lot of question marks remain, which makes the stock a bit speculative going forward.

I've taken a deeper look at First Solar's industry position and what these latest moves mean for the company. If you're looking for continuing these updates and guidance on the company whenever news breaks, The Motley Fool has created a brand-new report that details every must know side of this stock. To get started, simply click here now.

Is Suntech still alive?
Rumors swirled this week that Suntech Power (STP) would be acquired by Warren Buffett's subsidiary MidAmerican Energy. Suntech has defaulted on U.S. loans, and its Chinese operations are in insolvency, so it's unknown exactly what Buffett would be buying. Then there's the fact that Suntech doesn't meet any of Buffett's normal investing rules, so there are few industry observers who think an acquisition would go through.

I don't see any way Buffett wants any part of Suntech Power, and I chalk this up as a crazy rumor. I also wouldn't expect Suntech's suddenly rejuvenated stock to show life much longer. The core of the company is bankrupt, and it has no way to pay back debt, leaving equity holders with nothing once a liquidation or sale is complete.

Foolish bottom line
First Solar's moves are interesting and make the company worth watching over the next few years. On the other end of the spectrum, Suntech Power is a dying company, and eventually I think equity holders will be wiped out.