I'm going to let you in on a little secret. Some of the best investments are those that are a little misunderstood by the market. Because investors need to do a little more work, you can often find a company that is selling at a discount.

That's exactly where LINN Energy (OTC:LINEQ) finds itself these days. The company has been questioned by short sellers who don't understand certain aspects of it's business model. That tends to happen when you're blazing new trails.

As the first LLC/MLP dedicated to the production of oil and gas, instead of its transportation, the company has had a number of investors question its methods. There's nothing wrong with this because it means people are starting to take notice. That's why earlier this month the company had to issue a second response (link opens a PDF) to help its investors better understand its business. Today, I want to drill down a little deeper into why investors are questioning its maintenance capital spending.

Maintenance capex is the money a company needs to spend just to maintain its business operations. It's that constant battle we face with the second law of thermodynamics in which everything seems to be breaking down or needs to be replaced. Pumps break and pipes get old, so a company like LINN needs to spend money to keep everything in proper working order. While it's a bit more complicated than that for an oil and gas company, you get the idea.

An oil and gas company faces a real uphill battle to keep its production flowing. The accounting of that battle is where complications arise. Not all the funds LINN expends on maintenance activities are maintenance capital as some are classified as lease operating expenses. The picture is further clouded by depreciation, depletion, and amortization which only accounts for historical counts and not current development costs or specific development activities. If I haven't lost you yet, let me explain why this is important.

The crux of the negativity around LINN Energy has to do with the company's cash flow. Investors are questioning the soundness of that number, which if unsound calls into question the company's ability to pay its hefty distributions. If LINN is spending a lot of the cash flow it generates just to maintain its operations that could mean the business isn't really generating the free cash flow required to pay its distribution.

This situation is further clouded by the fact that the company is a very active acquirer. It confuses investors who aren't quite sure what's going on with the company's cash flow. What LINN is trying to demonstrate in its most recent response is that its maintenance capital is actually a fairly small expense compared to the overall growth of both production and reserves. Take a look at this slide from LINN's response presentation and you'll see what I mean: 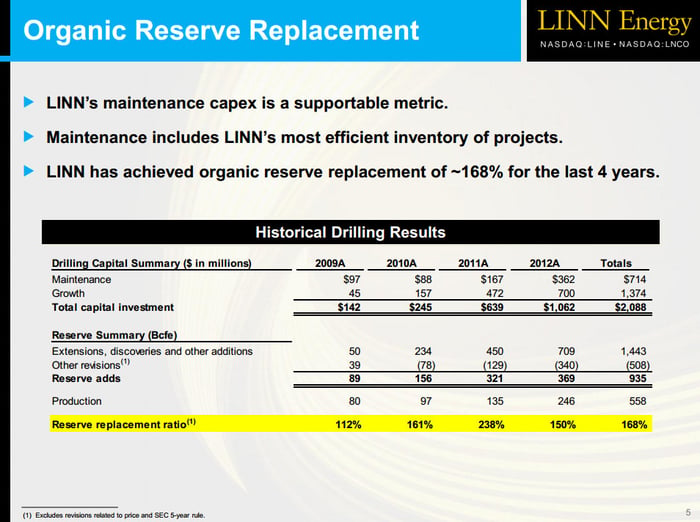 What we're seeing here is that even after producing 558 Bcfe of oil and gas, the company's reserves are higher. The slightly more than $2 billion the company spent since 2009 grew both production and reserves, with the key being that just a third of the funds being maintenance capital. This matters because LINN pays really high distributions which for simplicity is the cash it has left over after spending on maintenance so its true free cash flow. Most of that growth capital was funded by either debt or equity.

Where some investors saw a potential problem is in how the business is being funded. It would be unsustainable to distribute cash to investors if the amount was over what it costs to maintain the business. In LINN's case it has actually produced $325 million more in cash than it returned to its investors after factoring in maintenance capital. That still means that LINN went to the capital markets for more than a billion dollars to fund organic growth, but there is nothing unorthodox about that.

It really is the same thing as when LINN goes out and makes another deal. As a growth by acquisition company, LINN has no choice but to tap the capital markets to get deals done. That's why you saw the $4.3 billion purchase of Berry Petroleum (NYSE: BRY) in conjunction with its affiliate LinnCo (NASDAQ: LNCO) earlier this year as a stock-for-stock deal. Even when LINN makes a cash deal, like its two deals with BP (NYSE:BP) last year, its getting that cash from investors not from cash flow. For example, when LINN announced the  $1.2 billion purchase of BP's Hugoton assets, it announced a debt offering to pay for it. Because of LINN's business model, the company will continually need to tap the capital markets to grow.

What LINN won't do is tap the capital markets to maintain its business, nor to pay its distribution. That's an unsustainable model. The bottom line here is that despite the concerns of some investors, LINN's living within its means to keep that distribution flowing.

Investing in an energy company already comes with added complexity and LINN takes that up a notch further because of its structure. While that causes confusion among investors, I feel its worth the extra effort. LINN is a great story and a great income producer, and it has a management team that takes a lot of time to tell the story so that investors can feel more confident that their investment is in good hands.