Oneok's natural gas solutions in the Bakken couldn't have come at a better time.

Midstream operator Oneok Partners (OKS) announced last week that two of its many Bakken growth projects are now on line. The projects, the Bakken NGL Pipeline and the Stateline II natural gas processing plant, are providing much-needed natural gas infrastructure to the oil-focused Bakken. These two projects are just the beginning of the company's plans in the high-growth Bakken.

While the company was shut out in its attempt to provide a solution to crude oil, it is seeing a lot of growth in natural gas and natural gas liquids. This is a really good niche for the company as it's providing an indispensable solution for the industry. Because the industry lacks this infrastructure, natural gas flaring has become a real problem. Just look at the following chart from Oneok: 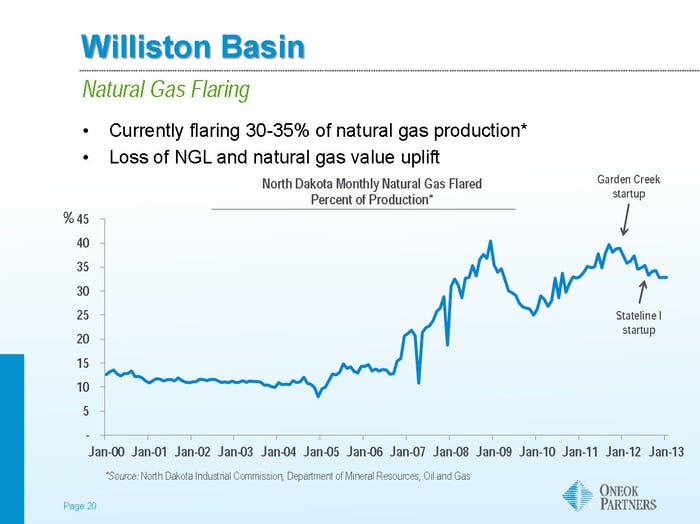 Kodiak isn't the only company that needs to reduce is flaring. Continental Resources (CLR 1.37%) has committed to "as close to zero percent flaring as possible." It does a much better job than Kodiak, having flared only 10% of its gas last year, which was down from the 20% of production it had flared the year before. These reductions aren't possible without new infrastructure, which is why Oneok's natural-gas-focused projects in the Bakken are so important.

The company's recently completed projects cost around $700 million to build. The important project area to watch is the growth in the companies processing capacity. The Stateline II plant is now the company's third natural gas processing plant in the Bakken. These plants will reduce the amount of flaring by enabling producers to get natural gas to customers. Overall, the company will be spending nearly $2 billion on natural gas gathering and processing projects through 2015.

These Bakken projects are just part of the equation for Oneok Partners and its general partner Oneok (OKE 0.40%). The company has already announced $5.3 billion growth projects that it's working on through 2015. In addition to that, it has more than $2 billion of unannounced projects in its backlog. Suffice it to say, Oneok will be busy over the next few years.

As these projects come on line they are expected to drive double-digit, annual EBITDA growth through 2015. Those earnings are expected to drive 8%-12% average annual distribution growth for investors in Oneok Partners. That's not bad, especially when units are already yielding just over 5%. If you're looking for a Bakken growth play, but want to earn income along the way, then Oneok or Oneok Partners are worth a look.