As I noted seven weeks ago, cancer statistics are both staggering and disappointing. Although cancer deaths per 100,000 people have been on the downswing since 1991 thanks to access to more effective medications and better awareness about the negative health effects of smoking, there is still a lot of research and progress yet to achieve. My focus in this 12-week series is to bring to light both the need for continued research in these fields, as well as highlight ways you can profit from the biggest current and upcoming players in each area.

Over the past six weeks, we've looked at the six cancer types most expected to be diagnosed this year:

The skinny on non-Hodgkin lymphoma

Approximately 79,000 cases of lymphoma -- a cancer of the lymphoid tissue and other autoimmune organs including the spleen -- are expected to be diagnosed this year. Of that total, 69,740 cases are expected to be labeled as non-Hodgkin lymphoma, which encompasses a wide variety of disease types, according to the American Cancer Society. The ACS is forecasting that 19,020 people will pass away this year because of NHL, making it the sixth most-likely cause of cancer-related death.

The good news for NHL sufferers is that survival rates are drastically improving, and it's a direct result of having better treatments available. NHL incidence rates have been declining since the late 1990s and dropped by 3% annually between 2005 and 2009. Five-year survival rates have improved from just 47% in 1975-1977 to 71% in 2005-2009, according to the ACS (link opens PDF file). 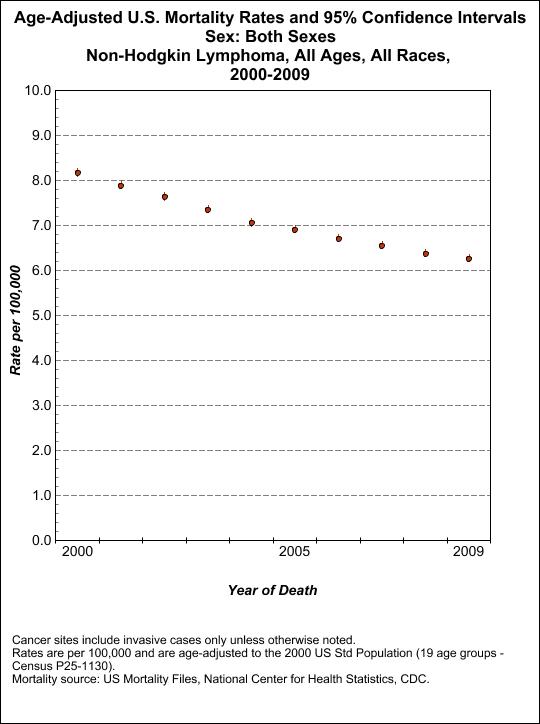 The unfortunate aspect of NHL is that there aren't too many precursors or warning signs that would signify whether someone's at risk or not. Outside of getting older, contracting HIV or T-cell leukemia virus type 1, or being given immune suppressants -- which are all shown to increase risk -- there isn't a test, rhyme, or reason to determining why people are unlucky enough to develop NHL.

The typical treatment regimen for NHL is chemotherapy. Occasionally radiation is used in combination with chemotherapy, but it's pretty rare since NHL tends to be a global problem. In very advanced cases where the disease has relapsed, physicians will occasionally turn to stem cell transplantation.

Where investment dollars are headed
As you might have figured, with NHL deaths expected to crest 19,000 in 2013, researchers are feverishly at work trying to bring revolutionary treatments to those who have this disease. In the meantime, here are some of the most common therapies currently associated with treating NHL.

Despite a landscape of improving survival rates, NHL trials haven't always gone according to plan. One prime example of this is Cell Therapeutics whose drug, Pixuvri, for the treatment of relapsed or refractory aggressive B-cell NHL, was recently turned down by England's governing medical body. Pixuvri has also failed on multiple occasions to be approved in the United States by the FDA.

What's coming down the pipeline
Now that you have a better understanding of some of the key treatments in NHL, let's have a look at a few promising treatments currently being tested in clinical trials. Keep in mind that with NHL being such a broad-reaching category, each of the following therapies may be very tightly defined with regard to its scope of treatment.

Your best investment
With so many subtypes of cancer comprising non-Hodgkin lymphoma, it appears obvious to me that research and investment dollars are going to soar, while big profits are likely heading in the direction of biotech and big pharma companies.

If you were looking for a riskier investment with great growth potential, that would be Pharmacyclics. Understandably it'll be sharing its Ibrutinib revenue stream with J&J assuming it gains FDA approval for CLL and MCL. The data would point toward a strong likelihood of that happening -- as would its labeling as a breakthrough therapy -- but the stock has already come so far, so fast, in the past four years that I'm not certain how much upside is left.

As for the most intricately tied investment, I'm going to side with Biogen Idec. Sure, Rituxan may have a slew of potentially nasty side effects -- and I could very easily have chosen Roche, its co-owner, in this spot -- but its positive effects for those who can tolerate the medication are undeniable. Given that Rituxan is combined with other existing and pipeline medications, I'd call it the safest play, and investment, in non-Hodgkin lymphoma. It also doesn't hurt that Biogen Idec recently boosted its product portfolio with a new multiple sclerosis drug, Tecfidera.

Stay tuned next week when we tackle the current and upcoming therapies for the treatment of thyroid cancer in this Tackling Cancer series.