I've heard a ton of remarks about how the Silverado and Sierra sales combined completely dominate the F-Series. That's false. Take a look at the trend over the last 15 years and see how close it really is.

Let me start by saying I'm invested in both Ford ( F 1.48% ) and General Motors ( GM 5.10% ) and think both are excellent investments right now. Let me also say I'm proud to own both because these two are paving the way for a Detroit – nay, an American – comeback in the automotive industry. Though they took different paths to get to where they are today, what matters most is that they've learned from past mistakes. What matters now is that management is actually doing its job, and the companies are changing consumer perceptions with each new vehicle put on the market.

That said, when it comes down to the full-size-truck segment, these two – and their loyal consumers – are bitter rivals. I recently wrote about how I believe the next generation F-150 will continue Ford's recent success over GM. Historically speaking, look how closes this battle really is. Let's look at a table and a graph, and see what we can take away from each. 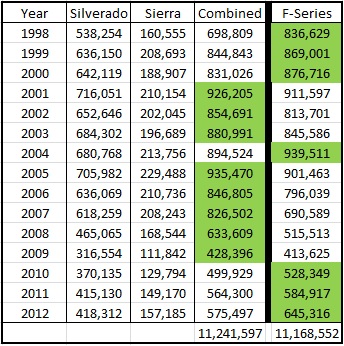 By a hair
There's a lot of things to consider here, but by the facts the Silverado and Sierra together have outsold the F-Series over the last 15 years. I'm not at all surprised to see that over the 15 years totaled, the two are within 75,000 vehicles sold of one another. What an incredible rivalry! Now you can see why both Ford and GM focus so heavily on this market; it's worth a ton of money and tough to take market share. Together Ford and GM crush the rest of the market – although Dodge Ram also had impressive growth in 2012.

Set you straight
There are no caveats here. Both automakers have historically had similar fleet sales, and both include all ranges and models in the U.S. figures. The only thing I may consider a caveat is that since the recession, Ford has managed to keep its lead while trimming operating costs much faster than GM. This has been great news for investors, and has helped Ford to much higher profit margins than competitors. GM is taking notes, and is taking the same steps to trim platforms as Ford has done, but look at the difference. By the end of the year Ford will have 85% of global sales from nine core platforms. In comparison, GM was a bit slower, and it will take until 2018 to get down to 14 platforms.

Enter the 2014 Silverado
GM's explanation for the F-Series recently outselling both its models combined is that its truck is older. This is true, since GM had to focus on correcting its balance sheet from the bailout it didn't have the cash to refresh its vehicle portfolio, which it can now finally begin doing. Now that the 2014 Silverado is going to be released this spring, all eyes will be on sales figures. This is the year in which the top dog in the most profitable vehicle segment will be decided – full-size trucks are estimated to represent over 60% of both companies' profits. Let's take a quick look at a graph made from the table above. 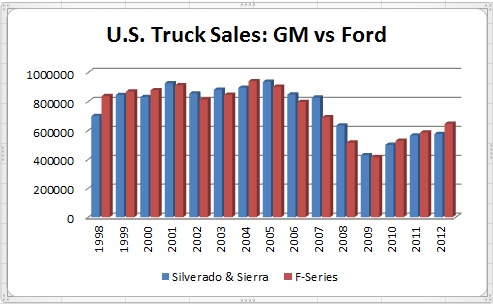 The long-term sales trend wasn't as evident with just numbers, so here's a better visual. No one knows for sure if full-size-truck sales will ever reach previous highs, considering that consumers are downsizing vehicles more often now. One thing is for sure: People will always need trucks. If fuel efficiency improves with the CAFE standards, there is a lot of room for growth that will greatly impact Ford and GM's bottom lines, and reward investors.

Will this be the year that Silverado and Sierra outsell the F-Series – for the first time since the recession ended? Or will it not be enough for GM, and in 2014 when the next-generation F-150 is released Ford will continue its recent success. I know where my bet lies, but after looking at the numbers today, I'm very happy to be invested in both. I'm also glad to be invested in an American comeback.