Please ensure Javascript is enabled for purposes of website accessibility
Log In Help Join The Motley Fool
Free Article Join Over 1 Million Premium Members And Get More In-Depth Stock Guidance and Research
By Dan Newman - Apr 18, 2013 at 9:51AM

Since 1981, 25 million people have died from HIV/AIDS. An estimated 1.7 million died in 2011 due to AIDS-related causes, with another 2.5 million newly infected with HIV. Beyond the human cost, the U.S. government spent $28 billion fighting HIV in 2012, and some African countries lose 1% in GDP growth each year due to the disease. It's difficult to grasp these numbers, but it's a problem crying out for several solutions.

One such solution is offered by Female Health Company (VERU -6.37%): FC2, the only female condom approved by the Food and Drug Administration and the World Health Organization.

Social opportunity
The Bill and Melinda Gates Foundation recently called for proposals for its Grand Challenges in Global Health grant program. One of the topics addressed this year is "reinventing the condom." As the blog post describes the issue:

It may seem obvious, but the success and impact of any public health tool hinges on that tool being used consistently and correctly by those who need it. Vaccines sitting on shelves don't prevent disease. New tuberculosis drug regimens won't help if patients stop taking them halfway through the necessary days. Likewise, the potential value of condoms is limited by inconsistent use.

The FC2 condom is a superb public health tool that allows women to initiate protection against sexually transmitted diseases. As to making sure it is used consistently and correctly, Female Health has a variety of initiatives. In South Africa, Female Health has distributed 20 million condoms and trained 10,000 health providers. The company also runs a website with product information and training, it will be investing $14 million over the next six years in HIV/AIDS and reproductive education with global agencies, and it has set a goal of reaching 120 million more women in the poorest countries by 2020.

Profitable opportunity
Some may guess that doing business with developing countries wouldn't allow for a very profitable business. However, when South African companies like Sasol (SSL -0.69%) -- which estimated 18% of its workforce carried HIV in 2007 -- must dedicate departmental budgets to HIV/AIDS, there are plenty of opportunities for Female Health to cover costs and earn a return. A healthier workforce for Sasol would simply cost less for the company, and Female Health can help companies like Sasol achieve a healthier workforce.

...a public-private partnership to provide and promote FC2 female condoms, prevented enough HIV infections in the first year alone to save over $8 million in avoided future medical care costs (over and above the cost of approximately $445,000 for the program). This means that for every dollar spent on the program, there was a cost savings of nearly $20. 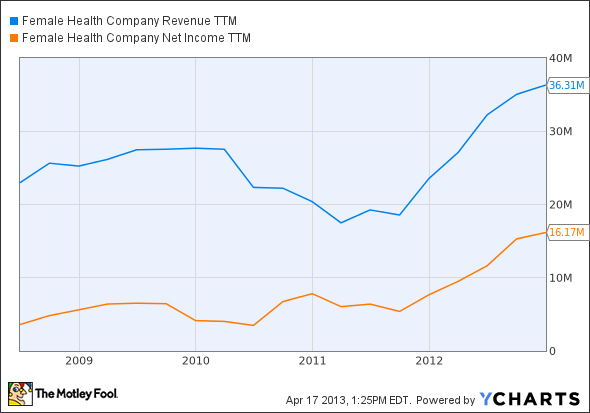 Risky opportunity
Female Health's major customers are from the public sector -- like the United Nations Population Fund and USAID -- which the company warns can make for lumpy revenue due to politics, changes in leadership, funding issues, and other delays. Additionally, while right now the FC2 is the only FDA and WHO-approved female condom, others are under development.

Still, with a pure play in female condoms, the company achieves a staggering double-digit net profit margin: 44% for 2012. This dwarfs the conglomerate and Trojan condom maker Church & Dwight's (CHD 0.60%) 12% net margin, even though Church & Dwight is more expensive on a P/E basis and offers a lower dividend yield than Female Health.

A niche play
Female Health's operations not only enrich the world, but have enriched investors. Its product is proven in both efficacy and economics, and offers a barrier to entry with regulatory approval. While is has the downside of relying heavily on public sector customers, Female Health is making a push for wider consumer adoption through offering the product in stores like Walgreens. Even if you may not deem it a worthy investment, it's a fascinating company.

Why Veru Stock Plummeted on Monday

Is Veru Stock a Buy Now?