While paying off student debt robs the economy of spending elsewhere, a new mindset can bolster long-term gains.

In the fallout of the financial crisis, many entered, stayed in, or returned to school. With more students, student debt skyrocketed, and at $1 trillion it's second only to housing debt. However, not all the student loans have contributed to a degree and thus increased earning power. Many students in for-profit colleges, where withdrawal rates can near 80%, ended up paying for a few classes before dropping out, putting them in a worse situation than before -- with the same employment opportunities and more debt.

While this increased student-debt load hurts the economy in the near term, it has taught those who bear it one thing: Don't live beyond your means. And in the long term, that will help the economy. 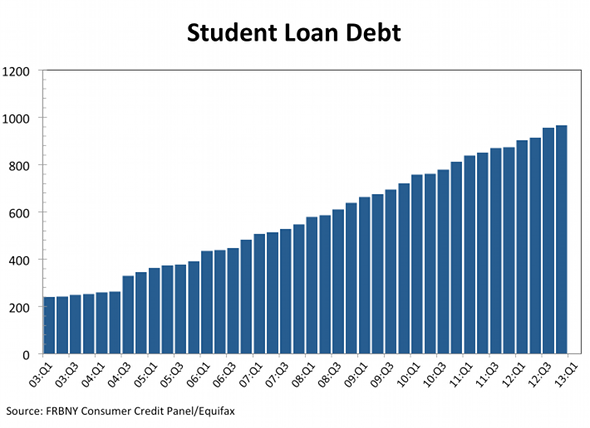 However, the Liberty Street Economics blog does offer some enlightening figures: "The share of twenty-five-year-olds with student debt has increased from just 25 percent in 2003 to 43 percent in 2012. Further, the average student loan balance among those twenty-five-year-olds with student debt grew by 91 percent over the period, from $10,649 in 2003 to $20,326 in 2012."

Even as more people have returned to school to gain skills, unemployment remains high, and the cause, unfortunately, isn't a lack of skills, but rather an overall lack of demand. Every graduating class since the recession has encountered tough job prospects, and there is little difference between unemployment among those who earn an associate's degree or attend some college and the general unemployment rate. A bachelor's degree, however, does make a big difference: 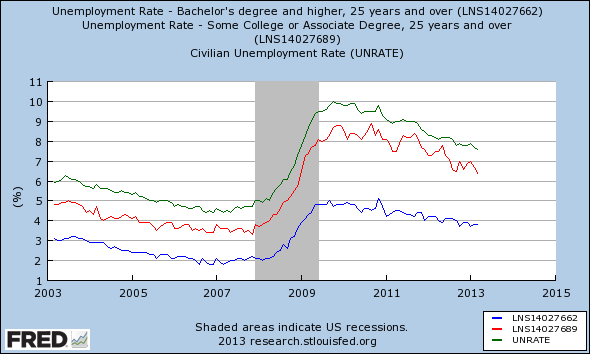 The same is now true for auto loans of 25-year-olds as well; those without a history of student loans are now more likely to have an auto loan than those with a history of student loans. Such behavior has taken revenue from Ford's (F -3.33%) financial-services segment, which earned about $16 billion in 2008 but only $7.7 billion in 2012. Add in the fact that drivers between 15 and 20 years old once made up 3.4% of new car sales in 1985 versus 2% in 2012, and it's clear that both cultural and economic factors make young drivers a tough sell.

As the student loan market grows, consumers have less to spend on houses and cars. While part of the reason is that those with student loans are more likely to have worse credit scores and less access to the loans, they may also realize that the excessive leverage that helped cause the Great Recession isn't a sustainable way to live.

With a more realistic view of what's affordable, cautious spending and generous saving can help create a sustainable economy, unlike living from one credit bubble to the next. While the tech bubble took the S&P 500 (^GSPC -0.40%) above 1,500 for the first time and the housing bubble took it back above that level, only long-term thinking, solid earnings, and sustainable consumer spending will keep the index above and beyond 1,500: 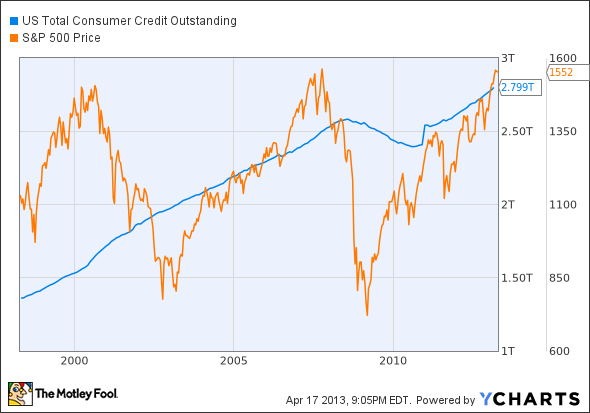