Initial jobless claims bumped up 1.1% to a seasonally adjusted 352,000 for the week ending April 13, according to a Labor Department report released today.

After initial claims fell a whopping 10.8% last week, this newest report dampens hopes of immediate improvement in the labor market. Market analysts had expected a slightly greater drop to 347,000. 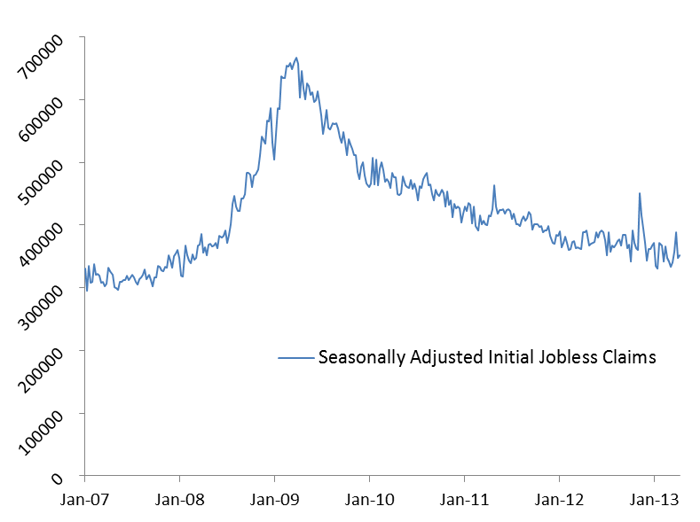 The four-week moving average continued to move up, increasing 0.8% to 361,250. But despite the gains, both the most recent week's number and the moving average clock in solidly below 400,000, a cutoff point that economists consider a sign of an improving labor market.

On a state-by-state basis, four states recorded decreases of more than 1,000 in their initial jobless claims for the week ending April 6 (most recent available data). After falling 2,660 the previous week, California led this week's drop with 12,890 fewer initial claims. The Golden State cited fewer layoffs across the board, with the largest employment wins in the services sector.

For the same week, 15 states recorded initial claims increases of more than 1,000. New York felt the largest jump, up 20,120 due primarily to transportation and educational services layoffs. Textile layoffs contributed to a 4,400-claim increase in North Carolina, while manufacturing helped push Ohio's initial unemployment claims up 3,030.