Please ensure Javascript is enabled for purposes of website accessibility
Log In Help Join The Motley Fool
Free Article Join Over 1 Million Premium Members And Get More In-Depth Stock Guidance and Research
By Daniel Miller - Apr 20, 2013 at 10:00AM

People remember how bad Detroit's vehicles -- excluding trucks -- were from the '90s to the mid-2000s. But things are changing.

At least once a week I hear someone hollering that Detroit's vehicles are junk. It makes me realize how far in the past consumer perceptions of Detroit's vehicles remain. I don't think some people realize how far domestic vehicles have come in the past five years. Some only remember when the Big Three made great trucks but lousy, inefficient, poor-quality vehicles -- and refuse to give it another thought. Some of the investing community still describes Ford (F 3.28%) and General Motors (GM 4.35%) stock in similar distasteful terms.

Times have changed. In looking at the new vehicles rolling out of Detroit, here are a few things for consumers to keep in mind, as well as what they mean for investors. I'll use Ford as my prime example.

Quality
It took years for the American consumer to give up on domestic vehicles, and it will take years to win them back, but the fact remains that the Big Three have been fighting -- and perhaps winning -- the quality battle. In your head, rank Toyota (TM 2.84%), Honda, GM, and Ford one through four, with No. 1 representing the highest total number of recalls over the past three years. Whom do you think comes out on top? The results may surprise you. 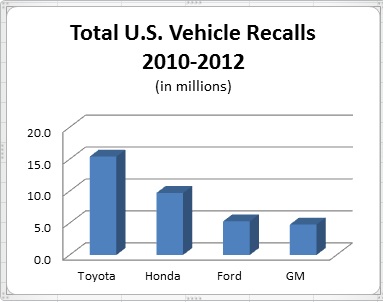 Toyota, previously known for its industry-leading quality, tops all automakers in total recalls. It also has more recalls than the No. 2 and 3 spots combined -- or GM tripled -- in that time period.

I'll take it a step beyond recalls and point out that Ford is winning critics over with its value. Ford was recently a shining star in the U.S News and World Report "Best Car for the Money" awards for 2013. It dominated the competition by taking home six first-place categories, more than any other brand.

Past and present
When Toyota and Honda first entered the U.S. market, everybody just knew Detroit was invincible. Well, we all know what happens when we get complacent, and sure enough, Detroit fell -- hard.

We find ourselves in a similar situation today with perceptions, except the roles are reversed. Recently it was unthinkable for Detroit to produce a quality and fuel-efficient passenger car to compete with the Japanese. People still struggle to grasp the notion that things have changed. After all, we just know the Toyota Camry and Corolla are unbeatable. The Camry has been America's best-selling car for 11 straight years, after all.

But look at how far the Ford Fusion has come in its short six-year lifespan: 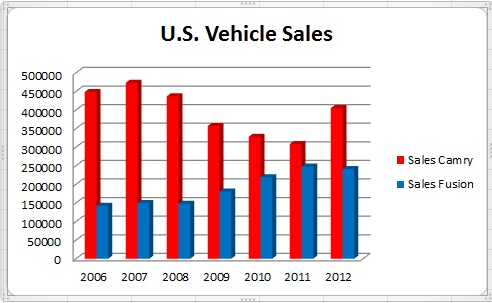 The Fusion is keeping pace so far this year as well, with both vehicles topping 80,000 sales in the U.S. for the first quarter. Camry sales, meanwhile, declined 12% last month, losing some ground to the Fusion, which gained 6%. The factory producing the Fusion is now running over capacity to try to keep cars on the lots.

But this race between the Fusion and Camry isn't the only story making headlines for the competing automakers. Last year, the Ford Focus topped over 1 million in global sales, allowing it to claim the No. 1 selling "nameplate" crown -- a crown that Toyota's Corolla had worn. When global sales for the Corolla sold under different names are included, the Corolla does top the Focus, with 1.16 million sold to 1.02 million -- but that doesn't change the fact that Toyota is probably scratching its head and wondering how Ford has managed to make such a quick turnaround. Ford not only competes in segments it was once laughed out of -- it's beginning to win.

Bottom line
Popular vehicles and better management have provided a consistently profitable bottom line for Ford. The company has also improved operations while growing economies of scale -- giving a boost to its industry-leading margins. It reinstated its dividend, and then soon after doubled it. Loyal investors from the start of Ford's turnaround are enjoying their spoils while waiting for a future that could bring even greater returns.

As consumers begin to give Detroit another chance, it should be a rewarding ride for Ford investors.