Please ensure Javascript is enabled for purposes of website accessibility
Log In Help Join The Motley Fool
Free Article Join Over 1 Million Premium Members And Get More In-Depth Stock Guidance and Research
By Tyler Crowe - Apr 21, 2013 at 8:37AM

Energy policy seems to be going every which way. What's an investor to do?

Whenever new governmental policies affect investments, investors can normally adapt to the situation. Normally, these policies will steer the industry in a certain direction that can be rather predictable. It is much more difficult, though, when governmental policy goes in opposing directions. Based on current legislative proposals, it appears that the federal government wants to go in one direction while Alaskans want to go in the other.

Let's look at what's going on with these two opposing proposals and what it could mean for investors in the energy industry.

Flaming out fossil fuels
The most recent budget proposal from the Obama administration can be viewed through several lenses, but the overlying theme is to foster greater alternative energy growth and increase governmental revenue from fossil fuels. Whether you agree with this policy or not, it's clear that energy is one of the focal points of the budget, with the Department of Energy receiving an 8% increase in spending in the face of several departments seeing budget cuts.

If the proposed budget were to move forward as is -- a highly unlikely situation -- several tax incentives for exploration and production will expire, a proposal that would equate to about $3.9 billion a year spread across the entire industry. It would also set up an Energy Security Trust fund by increasing royalties from oil produced on federal lands and waters. This increase would total about $250 million a year for the next decade. As expected, several fossil fuel advocacy groups such as the American Petroleum Institute and the Independent Petroleum Association of America have come out vehemently against these proposals and claim that these proposals will reduce exploration.

It's difficult to know exactly what will happen to the oil and gas industry if these policies were implemented, and there are several other factors that need to be considered as well. America has pulled so far ahead of other countries in drilling technology, it may take decades before everyone else catches up. Also keep in mind that energy capital expenditures for 2013 are expected to be 7% greater than last year and are approaching all-time highs. So while these kinds of moves would take some wind out of the energy space's sails, it will take a lot more to leave them dead in the water.

Trying to reclaim the throne
For many years, Alaska held the title of largest oil-producing state in the United States. But ever since its peak in the late 1980s, production has been on a steady decline. Also, with shale gas becoming easier and easier to access, Alaska has now fallen to No. 4 in terms of total production. 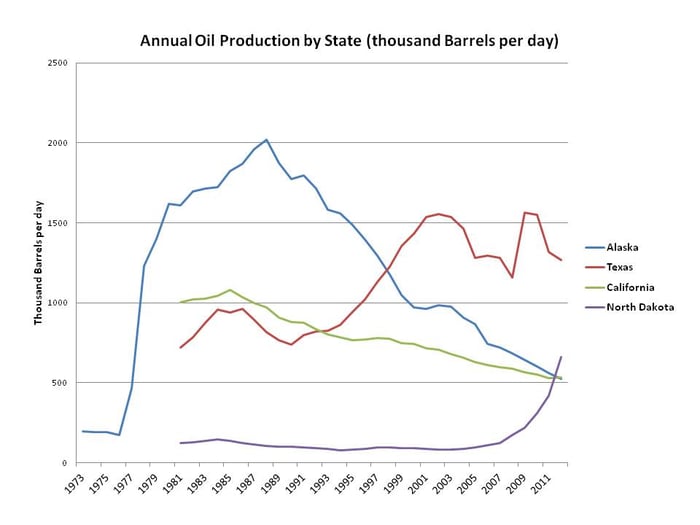 With so much of the state's economy tied to the success of the oil industry, Alaskan legislators are worried that the current tax structure has stymied production growth in the state. So this week, the state legislature has agreed on a massive tax overhaul that will save the industry $750 million a year in taxes. The hope is that lower taxes will drive reinvestment into North Slope and Alaskan offshore drilling.

Drilling in the North Slope of Alaska is inherently expensive, and it has caused several major oil companies to steer capital expenditures away from the region. Both ConocoPhillips (COP 2.95%) and Royal Dutch Shell (RDS.A) have put major holds on their drilling programs in Alaska as of late, citing both high costs and regulatory uncertainty for the cutbacks. So while the more lucrative tax incentives may help, it may not be enough to turn Alaska's production numbers around.

What a Fool believes
Agree with these policies or not, they are not binary outcomes for the industry. The Obama administration's proposals to do away with tax incentives for the oil and gas industry and increased royalty revenue will probably have a negative effect on exploration and production, but they won't cripple the industry. There are still several benefits to producing oil and gas in the U.S., and our dominance in shale gas drilling has led oil majors Chevron (CVX 2.72%) and ConocoPhillips to restructure their growth plans to incorporate more U.S. shale drilling rather than exploration plans overseas.

As investors, we don't need to play this situation as a binary outcome situation, either. With global demand for energy growing at a staggering pace, there are opportunities for both fossil fuels and alternative energy to grow immensely. Don't let political rhetoric or emotional biases cloud your judgement when investing, especially in the energy space. One of Warren Buffett's tenets of investing is to not let political and macroeconomic forecasts obscure your investment theory. Rather, take a step back and invest in great businesses dispassionately. While following this advice may not be easy, your portfolio will thank you for it.