How safe is LINN's distribution? Let's check its cash flow and find out.

Over the past few weeks I've been drilling down into LINN Energy's (LINEQ) recent response (link opens a PDF) to short seller comments about its business practices. The goal here is to better understand what the company is trying to relay to investors. Today, I want to drill down into what the company has to say about its cash flow.

The issue is that some investors and analysts don't like how LINN accounts for the puts it bought as part of its hedging strategy. As I'm sure you know, hedging is an integral part of the thesis of an investment in LINN. It the main reason why I think its distribution is safer than its peers.

There are many ways to hedge production and each way has pros and cons. For the most part, LINN hedges with swaps which are fixed price contracts. However, in the past the company has bought puts on a portion of its production which had an immediate cost but left that production open to upside if prices improved. Some investors have questioned the way LINN accounted for the cost of these puts. With so many other hedging options at its disposal, LINN decided to do away with buying puts because they simply are not worth the hassle.

The main concern that analysts had was that the purchases of puts were of such a recurring nature that it appeared to be a maintenance capital expense. LINN has always viewed the puts as capital costs, not just maintenance capital, and therefore the premiums it paid were an investment in its business. At issue is the company's true cash flow picture which brought into question the sustainability of the distribution.

LINN's practice when it purchases an oil and gas asset is to buy puts that are valued at around 10% of the purchase price. For example, when LINN bought the Jonah Field from BP (BP 1.80%) for roughly a billion dollars, the company pointed out that it had hedged 100% of the net expected oil and natural gas production through 2017. That means that the company spent an estimated $100 million over the purchase price in put premiums as part of the overall hedging strategy.

Here's where analysts are questioning how LINN is accounting for these puts. Including the Jonah Field, LINN acquired $2.85 billion in assets last year. However, the company spent $583 million on derivative premiums, as you can see in the chart below: 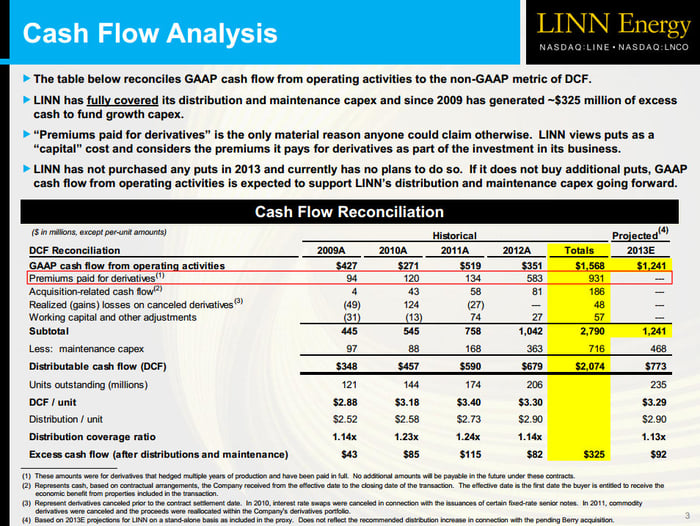 Which makes it appear as though some of the premium spent was to purchase puts to replace expired puts, hence, the recurring nature.

Because LINN views the puts as an investment, it doesn't account for the purchase of puts as detracting from its distributable cash flow. Nor does the company view the put purchases as creating an unsustainable distribution. This is where the company's business model can create confusion.

The oil and gas business is a capital-intensive business. A well does not steadily produce after it's drilled. Instead, it begins to decline so that its production needs to be made up elsewhere. It's a constant flow of capital into and then out of the business.

In LINN's case, a decent portion of the capital is flowing back to investors. In order to keep that cash both flowing and growing, LINN and its peers need to tap the capital markets to invest in new wells or acquire producing assets. LINN, together with its affiliate LinnCo (NASDAQ: LNCO), is known to be a serial acquirer, as evidenced by their recent deal to acquire Berry Petroleum (NYSE: BRY).

What's worried some investors is that LINN is using the capital market not only to buy oil and gas assets but to buy puts as well. If you go back to the chart above you'll see that since 2009 the company has generated $325 million in cash flow after distributions and maintenance capital. However, it's that $325 million that's being called into question because the company has paid $931 million to purchase derivatives over that same time frame. Some investors view that $600 million difference as a shortfall, whereas the company views it really as part of the cost of an asset it's acquiring.

Because of all this confusion, and because the company has a number of other hedging options, it's simply not going to bother purchasing puts this year. What's being risked is the upside if commodity prices rise above the cost of the puts. While I side with the company's accounting of its put purchases, an investment in LINN isn't one in the upside of oil and gas prices. It's an investment in the cash flow from oil and gas production assets. That's why I think the company is making the right move in simply locking in its cash flow with other hedging mechanisms. That enables LINN to simply continue to do what it does best, which is acquiring cash-gushing oil and gas assets and sending that cash back to investors.