Please ensure Javascript is enabled for purposes of website accessibility
Log In Help Join The Motley Fool
Free Article Join Over 1 Million Premium Members And Get More In-Depth Stock Guidance and Research
By Alex Dumortier, CFA - Apr 23, 2013 at 10:15AM

Solid numbers from a Dow stalwart.

DuPont's got the weather on its side
Chemicals manufacturer DuPont (DD) released its first-quarter results this morning, and the sun shone on its fortunes -- literally. The company recorded operating earnings-per-share of $1.56, beating the consensus estimate of $1.52, thanks to record earnings in the agriculture segment as dry weather encouraged U.S. farmers to buy its new seed and crop protection products. At $10.41 billion, revenue was exactly in line with Wall Street expectations.

Better yet, DuPont reaffirmed its guidance range for full-year 2013 operating earnings of $3.85 to $4.05 per share (unlike Caterpillar, the Dow stalwart that reported yesterday), which would represent an increase of 2% to 7% from the $3.77 per share the company earned in 2012.

The company also announced a 5% dividend increase, which will help support its robust 3.5% dividend yield. In fact, DuPont is a classic example of a blue-chip dividend-payer that has benefited from investor interest in two factors: income and quality. As a result, the shares have massively outperformed the S&P 500 since the market hit its low on March 9, 2009: 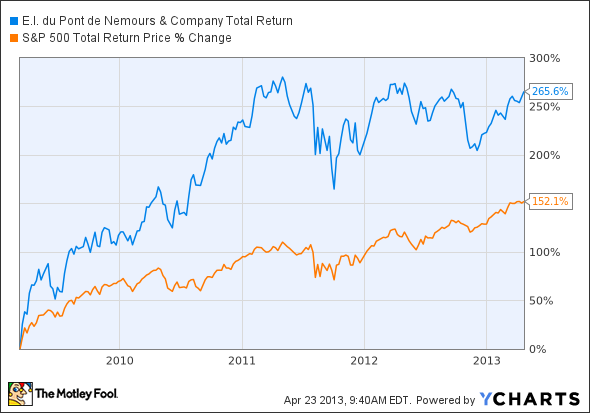 DuPont is an attractive franchise, and I would argue that this year's sale of its cyclical performance-coatings (i.e., paint) business makes it all the more so. For long-term investors, there is no problem in continuing to hold the shares at this level; nevertheless, trading at 13 times the estimate for the next 12 months' EPS, their valuation is toward the top of its recent range. Looking ahead, shareholders should expect adequate, rather than spectacular, returns.