Until a product comes out to prove that innovation is still alive in Cupertino, the jury is still out.

Fellow Fool Evan Niu did an excellent job covering Apple's (AAPL 1.68%) latest earnings release. In it, he pointed out several moves that he said "changed everything." Among the details the company offered:

While I agree with Evan on the positivity of all of these points -- and as a shareholder, I'm glad to see money being returned -- there's still a central concern that's left unattended to, and because of it, Apple's earnings really haven't changed a thing for me.

It's all about innovation
Let's take off our bean-counting hats for a second and remember what made Apple's resurrection over the past decade make us all stop in our tracks and wonder in awe at their products: They were so simple, so useful, and so addictive that once we used them, we couldn't understand how we survived without them.

First it was the iPod, then the iPhone, and finally the iPad -- with upgrades to Macs all along the way. Sure, Steve Jobs cared about the numbers, too, but in the end, it was all about creating things that we connected with on a visceral level.

That's why Apple was able to so quickly unseat BlackBerry, and why Nokia -- once the king of cell phones -- has seen its market share slump so incredibly between 2007, when the first iPhone came out, and 2012.

I have heard, for quite some time now, that a new Apple product is just around the corner. I'll be holding Tim Cook to his word that there will be "surprises in the works" that will be "released this fall."

When I originally invested in Apple, it was because the company was so clearly light-years ahead of the competition in terms of innovation. That simply isn't the case anymore. The competition has caught up, and over time, that's going to create some serious margin contraction.

Is it really that bad?
To be clear, I still own quite a bit of Apple shares, and intend on holding them for the time being. I'm trying to temper my impatience for proof of innovation in the post-Jobs era, and can't deny that the capital moves are nice (at least in the short term).

In the long term, what we could be seeing is Apple moving into a category Microsoft (MSFT 1.02%) investors had to endure a decade ago. The stock moved from being a growth stock, to an income and value stock. That's not necessarily a bad thing, as dividends do make quite a difference -- doubling the return of the investment. 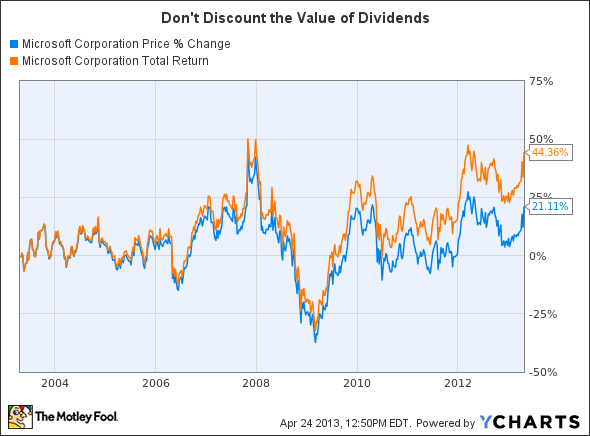 One things Microsoft has, however, that Apple doesn't, is a more sustainable competitive advantage in terms of its Office Suite, which is far stickier than the iOS ecosystem.

So, for me, what it all comes down to is this: Without evidence of continued innovation at Apple, it's simply not the same company that I bought into a few years ago. That doesn't mean it's a bad investment per se, but it needs to be re-evaluated (as all stocks do) based on the fact that it's more of a good stock than a good company.

I've already begun my re-evaluation, so stay tuned if you'd like to see how it plays out.