Please ensure Javascript is enabled for purposes of website accessibility
Log In Help Join The Motley Fool
Free Article Join Over 1 Million Premium Members And Get More In-Depth Stock Guidance and Research
By Evan Niu, CFA - Apr 25, 2013 at 8:30AM

Apple's profitability has pulled back from insane levels. Some investors have expressed concerns over falling gross margins, and there's one partially hidden reason contributing to the decline.

Much ado has been made over Apple's (AAPL -2.24%) gross margin contractions over the past year. Gross profitability peaked at an absurd (and unsustainable) 47.4% a year ago, and has fallen dramatically since. At the time, the company attributed this incredible figure to historically low commodity pricing, since gross margin came in a whole 5.4% higher than Apple's guidance.

That level of profitability may have spoiled investors, as Apple now faces tough year-over-year comparisons. Nothing looks as good as 47% margins for a company with meaningful hardware operations. 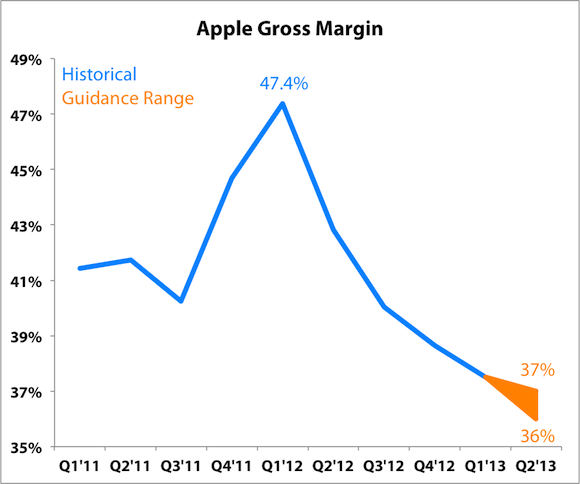 There are a number of reasons why Apple's gross margins have been falling, including pricing pressure and product mix shifts toward less-profitable devices. The iPad Mini is also hurting profitability, since it carries a gross margin well below Apple's corporate average.

Appreciating depreciation
Apple has dramatically ramped up capital expenditures in recent years, with most of this spending going toward product tooling and manufacturing equipment. These increases in property, plant, and equipment are also accompanied by higher depreciation expenses as a result.

Apple's accumulated depreciation and amortization has risen over 40% over the past six months, to $9.2 billion, with the vast majority of its property, plant, and equipment comprised of machinery and equipment.

The benefit of this spending is unrivaled manufacturing processes and higher quality products, which in turn contribute to Apple's premium branding and help it maintain some relative pricing power (even if there are industrywide pricing pressures).