The numbers
Zynga shares fell by as much as 9% during intraday trading Thursday, after the company said bookings -- its measure for in-game virtual goods purchases -- fell by a staggering 30% year over year to $229.8 million. While that number actually beat Zynga's own expectations, it was also down significantly from last quarter's surprisingly high $261.3 million.

Total sales also fell 18% from the year-ago period to $263.6 million as core online game revenue dropped 22%, while advertising revenue managed to rise 21% from the first quarter of 2012 to $34 million.

Net income came in at $4.1 million, or $0.01 per share, which actually beat analysts' expectations of a loss of $0.03 per share. In addition, Zynga was still cash flow-positive for the quarter, generating operating cash flow of $26.4 million and free cash flow of $23.2 million. Zynga also put some of its $1.67 billion in cash to use and paid off all of its $100 million in long-term debt.

Unfortunately, Zynga still seems to be struggling as it transitions away from its former dependence on Facebook (NASDAQ:FB), which at one point accounted for more than 90% of its bookings and revenue. Sure enough, daily active users continued their march downward to 52 million for the quarter, representing the lowest number the company has seen since it went public in late 2011. As a result, Zynga issued second-quarter guidance well short of analysts' estimates, projecting revenue to be in the range of just $225 million to $235 million.

Even even worse, Zynga also said bookings will likely plummet to a range of $180 million to $190 million.

So what's the plan?
As I wrote earlier this month, I'm still concerned that Zynga "won't be able to consistently pump out a large enough number of massively popular, low-priced games with its core business to keep players entertained for any extended period of time." Curiously enough, on that note, Pincus also stated that Zynga's forward pipeline will struggle in the near term, largely thanks to the company's decision to stop the development of two new games, which, while they could have provided a good short-term boost, "would have also been short-lived."

So while FarmVille 2 does currently manage to entertain nearly 40 million people per month, the fact remains Zynga can only pump out new versions of old hits for so long before users lose their interest.

So how do they plan to fix it?

First, Zynga is working on making new games stickier by placing more focus on games that can utilize a "connected experience" similar to what they've done with their Poker and Words With Friends offerings.

Included among those new games is War of the Fallen, a midcore multiplayer "card battler" game that's received decent reviews and is apparently 15 times more profitable than Zynga's other connected titles on a per-player basis. 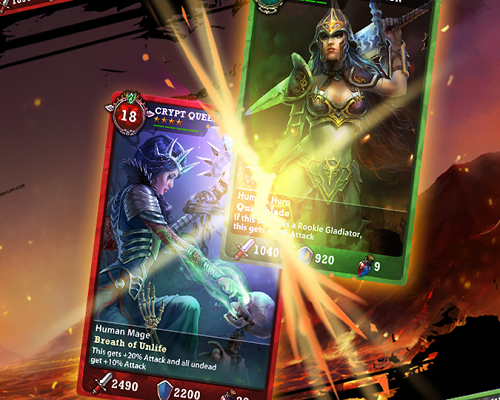 Will War of the Fallen garner the same mass appeal as less threatening smartphone titles like FarmVille 2 and Draw Something 2? Probably not.

But it is encouraging to see Zynga stepping out of its comfort zone in an attempt to grab some of the more fanatical long-term players, even if its new game does seem deceptively similar to Activision Blizzard's (NASDAQ: ATVI) new card battler, Hearthstone: Heroes of Warcraft.

Of course, I'm not sure which game came first, but I am convinced that for Zynga to survive over the long-term, it needs to use some of its cash pile to harness the ability to truly innovate and create new, unique titles which can stand on their own -- something industry stalwart Activision has perfected through more lucrative full-featured franchises like World of Warcraft, Call of Duty, Starcraft, Skylanders, and Diablo.

In the end, unless Zynga can prove it has what it takes to create a real moat around its business over the long term, I'm betting it has nowhere to go but down.

Is This Game Over for Zynga? @themotleyfool #stocks $ZNGA $FB Next Article
Current