As I noted eight weeks ago, cancer statistics are both staggering and disappointing. Although cancer deaths per 100,000 people have been on the downswing since 1991 thanks to access to more effective medications and better awareness about the negative health effects of smoking, there is still a lot of research and progress yet to achieve. My focus in this 12-week series is to bring to light both the need for continued research in these fields, as well as highlight ways you can profit from the biggest current and upcoming players in each area.

Over the past seven weeks, we've looked at the seven cancer types most expected to be diagnosed this year:

The skinny on thyroid cancer

There certainly is a give and a take to thyroid cancer. On one hand, thyroid cancer is the fastest growing cancer for both sexes. It afflicts women in nearly three out of every four cases, and incidence rates have been going up at a rate of 5.6% per year for men and 7% per year for women between 2005 and 2009. Worse yet, it's one of the few cancers whose risk doesn't seem to increase with age. A shocking 80% of newly diagnosed cases are people under age 65 according, to the American Cancer Society (links opens a PDF file). 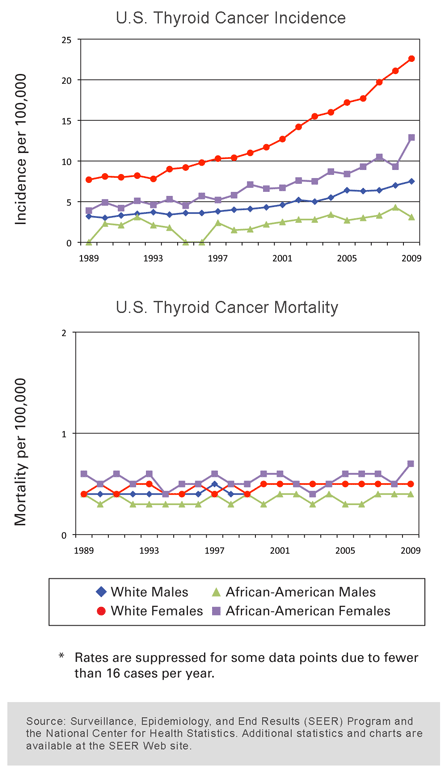 Amazingly, there aren't any diagnostic tests for thyroid cancer, so patients really need to keep their eyes open for lumps in their throat, or stiffness in their neck. Being female, having a history of goiter, or having been exposed to radiation are the most likely risk factors that could contribute to a thyroid cancer diagnosis.

Where investment dollars are headed
Thyroid cancer is treated in nearly every case with a full or partial thyroid removal since the majority of thyroid cancers aren't aggressive. However, in those rare cases where surgery isn't an option or the disease has metastasized to other parts of the body, there are two drugs approved by the Food and Drug Administration to choose from.

Just as we've witnessed with every previous cancer in this series, not every drug trial proves successful. Pfizer's (NYSE:PFE) Sutent, for instance, is a very successful treatment for kidney cancer, gastrointestinal stromal tumors, and pancreatic endocrine tumors, but it didn't fare as well when it came to thyroid cancer. In a midstage trial targeting locally advanced or metastatic anaplastic differentiated thyroid cancer, Sutent was linked to two serious cardiac side effects that an independent monitoring committee felt required a close follow-up. This may not preclude Sutent from an eventual approval in helping advanced cases of thyroid cancer, but its side effects were enough to curb most of the enthusiasm investors had for the adding another indication.

What's coming down the pipeline
With surgery and/or radioactive iodine therapy being such an effective tool in treating the majority of thyroid cancer cases, outside of early stage trials and preclinical studies there isn't much going on in the thyroid cancer pipeline. There is one late-stage treatment in development that could provide a better outlook for those suffering with a more aggressive form of the disease: Nexavar.

Bayer and Onyx Pharmaceuticals' (NASDAQ: ONXX) anti-cancer agent Nexavar could be well on its way to receiving FDA approval for patients with locally advanced or metastatic radioactive iodine-refractory differentiated thyroid cancer. Announced in early January, results from the late-stage trial demonstrated improved progression-free survival relative to the placebo. Nexavar, which is given in a tablet form twice daily, works by blocking receptors responsible for blood vessel growth, thereby starving the tumor, or tumors, of nutrients and oxygen needed to grow.

Your best investment
The good news with thyroid cancer is that a diagnosis isn't a death sentence and that it's curable if caught early enough. On the other hand, thyroid cancer also isn't an area of intense research, since surgery and radioactive iodine treatments seem to cure a vast majority of the population, even if thyroid cases are on the rise.

Normally I would break this section into a riskier and safer investment option, but in this case I think both Exelixis and Onyx Pharmaceuticals represent one and the same. Nexavar is already approved to treat unresectable hepatocellular carcinoma and renal cell carcinoma and looks poised to gain the indication to treat an advanced form of thyroid cancer as well.

Likewise, Exelixis is the pure play on metastatic medullary thyroid cancer. The fact that Cometriq nearly tripled PFS in trials compared to the placebo makes it the clear choice over AstraZeneca's Caprelsa, and its efficacy in bone metastases in trials has thus far been very impressive. Exelixis will need additional indications for Cometriq to become profitable, but it appears to have the highest risk-versus-reward ratio here, depending on Cometriq's success moving forward.

Stay tuned next week, when we tackle the current and upcoming therapies for the treatment of kidney cancer in this "Tackling Cancer" series.