Exelon (NYSE:EXC) reported earnings Wednesday, blowing away sales expectations and beating bottom line predictions. But with some nasty natural gas hedges and its stock near a 52-week high, is now the time to wave goodbye to Exelon stock? Here's what you need to know.

Number crunching
On the top line, Exelon excelled where other utilities have missed. The company raked in $6.89 billion in revenue, up 9.7% from Q4 2012 and 11% higher than analysts' expectations of $6.2 billion.

Up, downs, and merger margins
Exelon's earnings were pushed up and down by a variety of factors. Higher energy costs, lower realized market prices, increased O&M costs, and ongoing capex pushed profits down. Investors are also getting smaller pieces of Exelon stock's profit pie due to its Constellation Energy merger last March.

The newly merged companies lay claim as the nation's largest competitive integrated energy provider, but Exelon's future success depends on how much synergy can be squeezed from its new scale. Q1 sales came in 47% above 2012's pre-Constellation sales, and the company is on track to complete a $550 million run rate by 2015.

However, a look at Exelon and Constellation's separate 2011 revenue shows that Constellation should have added around 73% to Exelon's sales, and this most recent report reveals lower Constellation gross margin expectations for fiscal 2013.

But even if bright futures are slightly dimmer, Exelon is realizing gains today. Constellation's additional energy capacity improved generation margins, and higher nuclear volume kept steady income creeping in. The company recently won approval for higher rates at its BGE and ComEd regulated utilities, and it expects new legislation to be passed in Illinois that would improve enable Exelon's ability to push ahead with a major grid modernization project.

Trimming the hedges
If there's one word to describe Exelon stock, it's "nuclear." With around 19,000 MW to its name, the utility's future is tied to this energy source, for better or worse.

In unregulated and increasingly competitive markets, Exelon has hedged hard to ensure that any major energy spikes or stumbles will have a dampened effect on its financials. With recently rising natural gas prices, the utility took a $235 million hit this quarter as its defensive position proved too pessimistic. 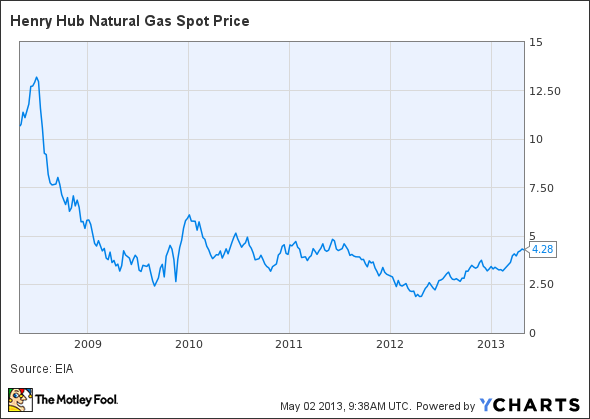 But increasing natural gas prices are excellent news for nuclear's long-term outlook. Cheap natural gas nearly killed the competitiveness of fuels like nuclear and coal, but its recent rise should put these energies back in business. With 61% coal capacity, TECO Energy (NYSE: TE) will be right beside Exelon as it enjoys its nuclear comeback.

Short dividends and long stocks
Exelon's last earnings report was met with mixed reviews by income investors after it slashed its dividend 40% to free up finances and balance books.

Mr. Market seems to have approved of the move: Exelon stock is up 18% for Q1, an amazing turnaround after nearly five years of plummeting prices. Atlantic Power (NYSE:AT) hasn't been as lucky with its own dividend division. Even though the utility announced a 66% haircut last quarter for many of the same reasons as Exelon, its stock is down 60% over the last three months. 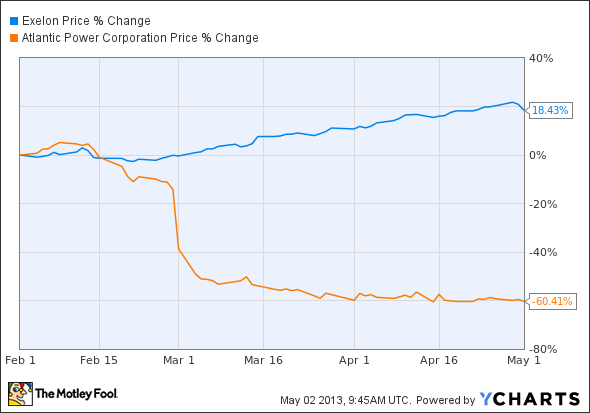 Will Exelon stock excel?
At first glance, Exelon's quarter seems good but not great. However, much of the utility's steady success has been masked by heavy hedges, one-time costs, and some kinks in its Constellation merger. Even with Exelon stock's recent rise, the utility still has significant upside in the quarters to come.