Ever since the United States of America became a nation, the struggle between opposing social classes -- those who have much, and those who have very little -- was present. In the early 1900s, John D. Rockefeller was worth over $300 billion (adjusted for inflation), and Andrew Carnegie was not far behind, controlling a wildly disproportionate amount of the country's wealth. The two men controlled such expansive and important businesses that the government was forced to make new laws to restrict monopolies, like the Sherman Act of 1890, the Clayton Act of 1914, and the Federal Trade Commission Act of 1914.

The ultra-rich will always exist, but over the past 50 years, we've seen a divergence in income among levels of the middle class. What's interesting is what has caused this change in wealth in America. 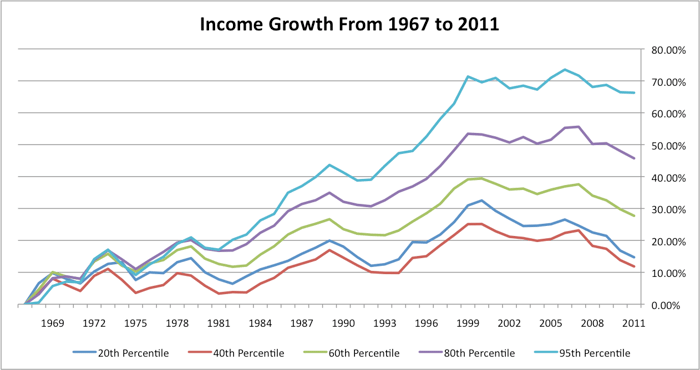 As is clearly illustrated, the gap between the haves and have-nots has intensified, and the country is quickly leaving half of its citizens behind.

The drivers of income inequality
The biggest factor propelling the ever-expanding income gap is education. The Census Bureau tracks incomes among different education levels, and since the current survey began in 1991, the results are resoundingly weighted toward those with higher educations.

You could point to many factors for this divergence among incomes as education level changes, but the biggest factor is the productivity of manufacturing and the falling demand for unskilled labor.

From 1991 to 2011, overall private business output per labor hour rose 58%, while manufacturing output per labor hour rose 111%. Machines became bigger, better, and more complicated over that time, requiring fewer low-skill operators to produce the same amount of goods. Meanwhile, skilled operators who are in demand need a more advanced educational level than a high school degree -- a trend I have seen in my own career.

As a young engineer at 3M (NYSE:MMM), it was my job to install equipment that was faster than existing equipment, in order to reduce labor costs. To paint the picture: If five pieces of equipment run by five operators made a total of 1,000 rolls of tape per hour, we could install a piece of equipment that only needed three operators and could produce 5,000 rolls of tape per hour. 3M produced more tape and needed fewer workers, which increased its efficiency, productivity, and lowered costs. This has happened throughout industry over the past 50 years, resulting in rising productivity per labor hour and less demand for low-wage labor.

The flip-side: The workers, who were now operating a piece of equipment that cost tens of millions of dollars to install, had to be smart to keep it running, with more than a ninth-grade education, a requirement the company may not have had in 1967. You can see above that a worker with at least an associate's degree makes more than double someone without a high school education. The economy doesn't just demand a pair of hands these days; it demands a smart pair of hands and it's willing to pay for them.

Companies squeeze more out of workers
To put this in a corporate context; I went back and took a look at how manufacturing companies have improved productivity over the past two decades. 3M, General Electric (NYSE:GE), and Ford (NYSE:F) are three of the biggest manufacturers in the country, and also among the largest employers. Each shows the same trend of improving productivity per employee by about 100%

Clearly, companies are squeezing more revenue from each employee, and they need fewer low-skill workers in the process. Ford even cut its staff by 46.9%, one of the major drivers of layoffs for blue-collar employers in Detroit.

Why are there haves and have-nots?
Education isn't the only reason for the divergence of incomes in America, but I think it's the main driver, and I don't see any reason the trend will change course. Fewer low-skilled workers are needed to produce more goods, and people need a way to differentiate themselves to demand a high wage.

Kids, it's time to hit the books.