After dipping briefly below $400, Apple (NASDAQ:AAPL) seemed to have corrected sufficiently to begin a new climb higher. Tuesday's trading session, however, saw the stock slide by 2.4%, with another 2% coming during Wednesday morning's session. The catalysts for the fall include reports surrounding a Justice Department investigation and news that Julian Robertson's Tiger Management has pulled its stake in the iPhone maker. While neither of these events is good news, the dip in the stock suggests that Apple has entered a new era of "any reason to run" instead of "any reason to buy."

When the company was firing on all cylinders, investors found any excuse imaginable to buy shares and drive the stock price higher. This type of buying helped drive shares above the $700-per-share level last fall. That mentality has changed significantly, it appears, with snags causing the stock to be punished severely for negative news. Looking ahead, shareholders must now balance the apparently cheap price of Apple against arguably more attractive options from Google or Microsoft.

Apple claims that it reached independent agreements with each of the publishers and that no wrongdoing took place. The complaint referenced a "concession" that Steve Jobs apparently made in his biography: "[We] told the publishers, 'We'll go to the agency model, where you set the price, and we get our 30 percent, and yes, the customer pays a little more, but that's what you want anyway.'" When the news hit the wires, Apple shares were hit hard: 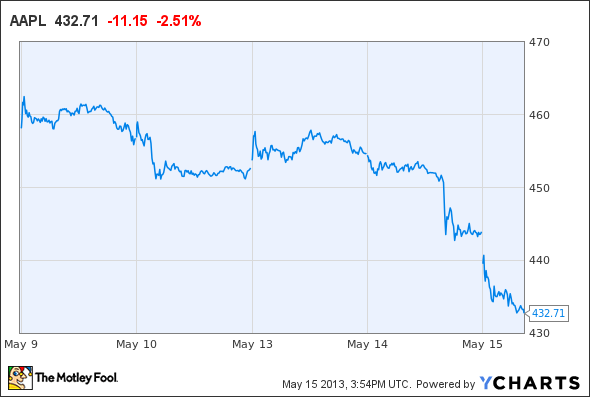 Tiger steps out of the mix
Also of some concern for Apple is the withdrawal of some large institutional investors, including Tiger Management. Investors with positions in excess of $100 million in a given name are required to file Form 13F with the SEC. A review of those filings show that Tiger has completely liquidated its Apple holding. A lack of institutional support suggests -- not proves -- that Apple has lost some of its sway, particularly as relates to future margins.

The significance
With Google pioneering Glass, hitting new highs, and rolling out new services such as subscription-based channels for YouTube, the Search King looks particularly appealing, even as its price continues to climb. Likewise, with the new Xbox set to be released later this month, new Windows Phones on the way, and rumors that it will acquire Nook Media, Microsoft looks to be on the upswing. It is against this backdrop that Apple investors have lost some faith.

The company that was once known for being at the forward edge of innovation has stumbled of late and caused concern about its ability to stay on top. There is a definite argument to be made that this perception creates a buying opportunity as shares dip lower. The counterpoint, however, is that with the overall market touching new highs with some regularity, a correction in the broader market is due. Apple doesn't appear strong enough as things stand to buck the general trend, meaning that weakness in the overall market will pull down shares as well. Apple currently looks interesting, but caution is appropriate with the underlying conditions that exist today.