The gushing oil well at Spindletop Dome in Beaumont, Texas, is one of the most iconic images in the history of oil. When the well hit paydirt, oil spewed 150 feet into the air at a staggering rate of 100,000 barrels per day.

We've come a long way since that Spindletop gusher 112 years ago, and today's industry faces greater challenges finding new sources that can be sold at a reasonable rate of return.

On a recent conference call, Core Laboratories (NYSE:CLB) CEO David Demshur stated that outside some of the best spots in the U.S., oil producers in the U.S. will slow down exploration if oil prices are to remain below $90 for a sustained amount of time. Let's look at a few factors that might give some credence to Demshur's claim.

1. Higher resource costs. According to Cheaspeake Energy (OTC:CHKA.Q), the average shale well in the U.S. is drilled to 7,800 feet vertically plus several thousand feet horizontally and is injected with more than 5 million gallons of water, sand, and chemicals to fracture the tight pores where the oil is hidden. All of this effort is for an average initial production rate of about 450 barrels per day.

All of that extra work to tap a well translates into using resources -- a lot of them. The list of requirements for a new well is so staggering, even the price of food products can affect how much it costs to drill a well. in Q2 of 2012, Halliburton (NYSE:HAL) took a big hit on earnings because the company overspent on guar gum, a thickening agent it needs for fracking fluids. When all of these kinds of costs are added up, the average well in the U.S. today costs about $6 million to $11 million.

It's plain and simple: Money just doesn't go as far as it used to. According to a report by Barclays, spending in the exploration and production sector increased 19% and 11% in 2011 and 2012, respectively. Over that time period, output increased only 0.1% in 2011 and 2.2% through first 10 months of 2012. The increased costs to get marginal results back will ultimately result in higher prices.

2. Location, location, location. To add insult to injury, these higher costs are compounded by the fact that the places where we're finding oil are in remote, hard-to-reach locations. Whenever a company ventures off into one of these remote locations in search for oil, it's a higher-risk situation that involves a lot of costs.

There are two great examples of these kinds of sources to the north: the Alaskan offshore and Canadian oil sands. These two regions have been giving exploration and production companies headaches for years. Royal Dutch Shell (NYSE:RDS.A) has spent $5 billion over the past five years trying to tap a potential source in the Chukchi Sea off Alaska, and so far it doesn't have a drop to show for it. Also, because of high costs and slumping prices, several producers are shelving plans to build out Canadian oil sands, with French giant Total (NYSE:TOT) taking a $1.6 billion loss to completely walk away from the project.

What makes these projects unattractive? The breakeven costs. A Wood Makenzie study recently showed that the breakeven cost for a new Canadian oil sands project is between $65 and $100 per barrel, depending on the type of extraction. Add transportation and a rate of return, and these projects don't make economic sense unless oil prices are high.

3. Taxes and regulation. It costs a pretty penny to do business in the oil and gas space. According to the EIA, about 11% of the price of a gallon of gas foes to federal, state, and local taxes. 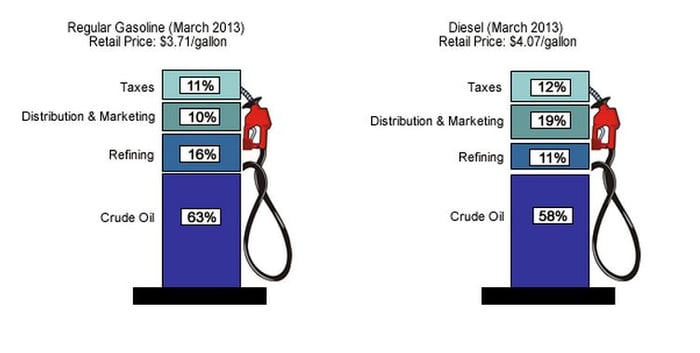 If the recent budget proposal from the Obama administration were to pass as is, though, that could change. The additional taxes and fees for the industry could total as much as $90 billion over the next 10 years. It's very unlikely that oil companies will be happy to let these additional taxes eat into profit, so we will probably see an uptick in oil if these proposals were to be enacted.

You also have to take into account regulation, safety, and liability costs. According to a report by Lux Research, oil companies pay about $0.70 per barrel of oil on safety regulations, but that figure could be going up. The industry is expected to spend an additional $21 billion over the next 20 years. What's more expensive, though, is a spill. It's estimated that the liability costs for cleaning up is about $8,000 per spilled barrel.

Much of the public demands that oil and gas drilling be safer, but we will have to be willing to shoulder higher oil prices if we expect oil companies conduct their business in a safer, more environmentally friendly way.

What a Fool believes
Oil and gas prices are generally based on supply and demand, but there are also a myriad of economical, social, and political factors that can pull prices in several different directions. Of course, factors such as seasonal demand and speculation swing prices up and down rather quickly, but the underlying costs of doing business in the oil industry today are going to keep prices high for the foreseeable future.