The mandated blending of ethanol in motor fuel -- specifically when produced from corn -- is a highly controversial issue. Is it really corrosive to engines at concentrations of just 10%? What about 15% blends? Does it really cost drivers at the pump? If so, how much? While ethanol does, in fact ,have a lower energy density than gasoline (thereby shortening each trip you make), the arguments surrounding the fuel are often rife with misinformation from both sides.

It doesn't have to be so complicated. Controversy aside, there is one calculation that can bring everyone together to support ethanol. The calculation is so simple that you can do it on the back of a napkin. What if I told you that simply blending ethanol into motor gasoline saved the United States $50 billion in 2012? That represents the equivalent amount of crude oil displaced by ethanol. Don't believe me? Here's how it works from the first corn kernel to the last dollar.

Where does ethanol come from?
As you can imagine, most of the country's capacity is centered in Corn Country. There are also facilities as far west as Oregon and as far east as Fulton, N.Y.

Who's making all of this controversial stuff? There are numerous ethanol producers in the United States, but only three companies have annual production capacities exceeding 1 billion gallons. Archer Daniels Midland (NYSE:ADM), Valero (NYSE:VLO), and POET have a combined capacity of more than 4.5 billion gallons -- good enough for 35% of the entire domestic market. The balance comes from dozens of companies with operations of various sizes and sources as wacky as cheese and leftover beer. Investors have been hit with volatility in the ethanol market before, so this production represents a sizable revenue stream for each company. 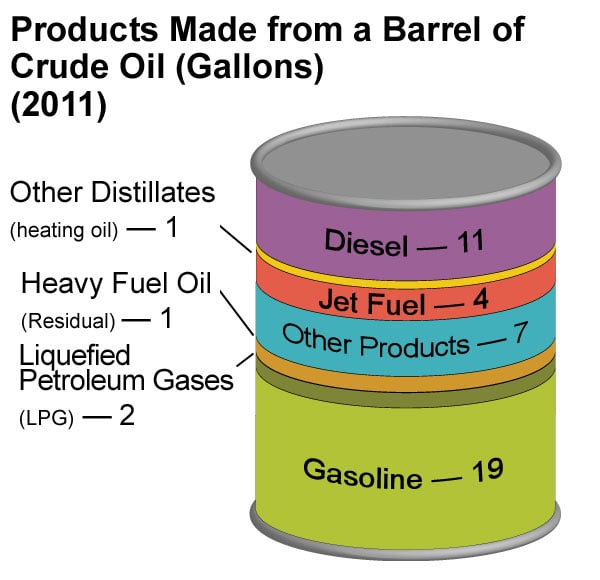 Don't worry; the math is correct. One barrel of crude oil yields a total of 45 gallons of refined products.

While refiners often gripe about paying to subsidize ethanol production, consider the broader context. Sure, the EPA estimates that the two refiners I mentioned will pay close to $11 billion each on ethanol blending credits in 2022 -- the final year of the Renewable Fuel Standard mandate. But displacing gasoline in the American market allows more to be sold overseas, where margins are higher, thus boosting their bottom lines. Besides, I think the law will be changed before then in favor of refiners.

50 billion reasons
The final step is easy. The EIA reports that the average price of Brent crude in 2012 was $111.65 per barrel. That puts the final savings from displaced gasoline at $50,928,070,175 -- all thanks to ethanol. To put that in perspective, that's roughly the size of Apple's share-repurchase program, the financial cost of Hurricane Sandy, or the amount Russia wants to spend on its space program by 2020.

As promised, here's the back-of-the-napkin calculation:

See? It isn't that complicated after all!

Foolish bottom line
Boosting America's trade balance -- and the bottom lines of refiners -- is just one piece of the complicated jigsaw puzzle called ethanol. Why is it the default first-generation biofuel? Ethanol fermentation is a widely known and easily understood process. In addition, America has no shortage of corn (most years). I don't believe it's the best alternative fuel that we can be making from corn starch, but it is the best that we have until science bails us out with second- and third-generation fuels. Until then, we can enjoy a $50 billion-per-year discount on imported oil. Thanks, ethanol.