For years we've been hearing about how much oil we import from foreign sources, particularly the Middle East. While it's true that we import a lot of our oil, there's a bit more to the story, especially when you look at the trade between the U.S. and Mexico.

As an interesting side-note, the oil trade is much larger than the drug trade, which is estimated to be somewhere in the $19 billion to $29 billion range each year. Estimates regarding the total percentage of drugs in America that either originate in, or travel through, Mexico range from 40% to 67% of marijuana and 95% of all cocaine. While that's still a saddening amount of drugs crossing our borders, it's an interesting benchmark when thinking in terms of the energy trade between the two countries.

Further, the oil trade with Mexico highlights an interesting dynamic. Even as the U.S. imports a significant amount of Mexican oil, a large portion of that amount is returned in the form of refined petroleum products, mainly because our refineries are equipped to process the heavy crude that comes from Mexico. This crude can be purchased more cheaply than the light crude in the States and then exported back to Mexico or other countries in the form of refined products. It's this global gas trade that's causing a growing amount of the gasoline produced in the U.S. to disappear beyond our borders.

Simply put, a lot of oil and petroleum products flow back and forth between the two nations:

Another reason refined products are moving off our shores is that Americans are driving less while also operating more fuel-efficient cars, all as international demand for refined petroleum products remains robust. This scenario has pulled more products into the export market, which is paying a premium. That's been important to Valero (NYSE:VLO), which has managed to capture an average of 20% to 25% of this export market.

The export market has indeed been robust, with Mexico being one of the most important markets: 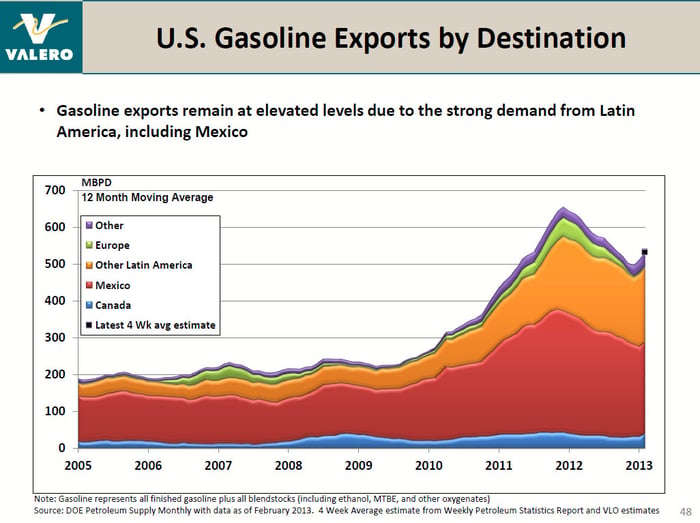 Increased export capacity is important, according to Tesoro (NYSE:ANDV) CEO Gregory Goff, who notes that the profitability of the refining industry will be increasingly dependent on its ability to expand export capacity in the future. Because fuel demand is waning in the U.S., refiners need to take advantage of the growing appetite for fuel globally. He also noted that "our country now ships more gasoline and distillates overseas than any other U.S. export." While a lot of that product is simply going back to Mexico, it's important for that trend to continue for refining margins to stay high.

The energy trade between the U.S. and Mexico really is a two-way street. American Gulf Coast refiners want to be able to purchase the discounted heavy sour Mexican crude, which can trade between a $5 and $10 less than Brent crude oil. That helps to increase crack spreads and profitability at refiners. Because Mexican refineries aren't as well equipped to handle this heavy crude oil, it makes sense to ship it out to be refined and then reacquired as a lighter-grade product such as gasoline or diesel.

If only the drug trade was so beneficial to both sides.