I have jokingly referred to Amgen (NASDAQ:AMGN) in the past as a "senior citizen" of biotech. The company was founded 33 years ago, making Amgen a virtual Methuselah when it comes to biotech companies. Regardless of age, every stock needs a checkup every now and then. Let's see how Amgen stock holds up in this month's checkup.

Performance
Shares of Amgen are up more than 15% so far this year. That's not too shabby, but how does the stock compare to the rest of the companies in the S&P 500 index? 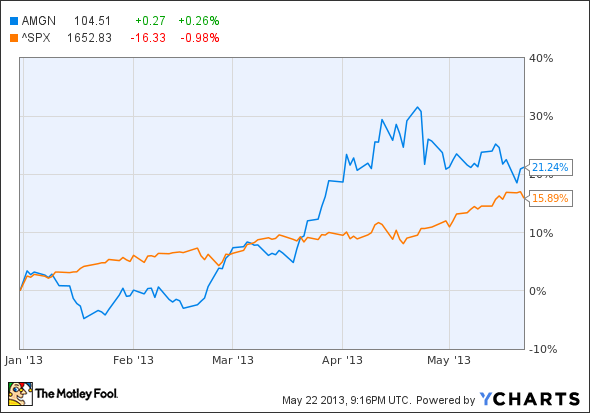 The first half of 2013 shows Amgen stock easily outpacing the S&P 500. Of course, different sectors do better in different market conditions. Perhaps comparing Amgen to other biotech stocks might show a better view of its performance. Let's use the iShares Nasdaq Biotechnology ETF as a proxy for the rest of the biotech universe. 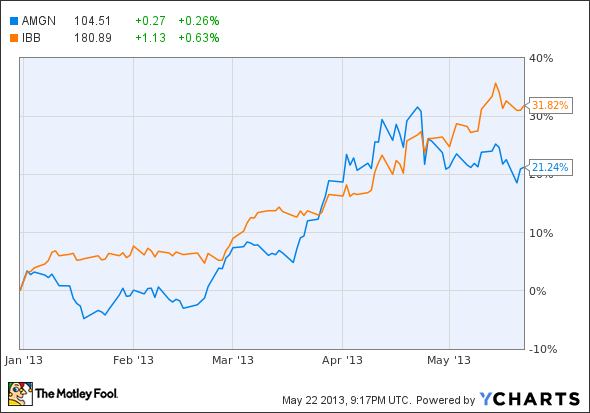 Unfortunately, Amgen doesn't look as hot when stacked up against only other biotech stocks. The poorer showing stems in large part from incredible runs by the two companies that make up a higher percentage of the ETF's holdings than Amgen does. Both Regeneron Pharmaceuticals (NASDAQ:REGN) and Gilead Sciences (NASDAQ:GILD) are up more than 50% so far this year.

Valuation
What about valuation? Amgen's trailing price-to-earnings multiple currently stands at nearly 18. That doesn't seem too high for a biotech stock. Looking at the company's P/E history sheds a little more light, though. 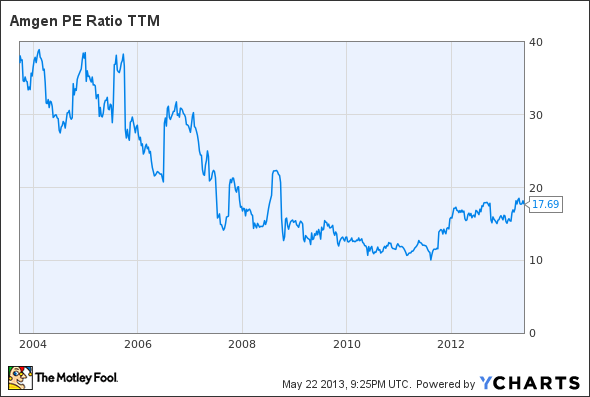 If we look back over the past 10 years, Amgen stock looks downright cheap based on trailing P/E. However, its trailing P/E is actually now at the highest level since 2008.

Compared to other biotechs, Amgen's valuation based on trailing P/E looks attractive. Regeneron sports a trailing P/E ratio of 35, while Gilead's multiple stands at 31. Biogen Idec (NASDAQ:BIIB) and Celgene (NASDAQ:CELG) are even pricier, with trailing P/E values near 37.

Amgen stock seems dirt cheap by comparison with these other biotechs on a forward P/E basis. Its forward multiple of below 13 is well below Celgene's 18 and Gilead's 19. Biogen is even higher at 23, with Regeneron blowing the curve with a 43 forward P/E.

What do the "experts" say about Amgen's valuation? S&P Capital IQ pegs the biotech's fair value at around $113 per share. That's a little higher than the stock's current price.

The big positive stems from anti-inflammatory drug Enbrel. Amgen made $4.2 billion last year from the drug. Combined with Pfizer's $3.7 billion, that puts Enbrel in a solid No. 2 position behind market leader Humira. Sales continue to grow strongly -- and Amgen stands to profit even more as Pfizer relinquishes its North American royalties later in 2013.

That big negative comes from Neulasta/Neupogen. A biosimilar for the drug franchise hits the market in November. Amgen will soon need to replace the inevitable lost revenue.

Then there's the big question mark about Amgen's pipeline. The biotech has several drugs in late-stage clinical studies. An announcement of phase 3 results for one of them -- ovarian cancer drug Trebananib -- is expected this summer.

I suspect that Amgen will experience solid growth over the next few years. However, that assumes continued strength for Enbrel and Xgeva/Prolia, as well as generally good news from the company's pipeline.

Overall
Overall, I think that Amgen stock still looks to be a reasonable buy for now. There are better alternatives in my view, though. I rank Celgene and Gilead more highly when growth potential is factored into the equation. However, I like Amgen's 1.8% dividend yield. That's something the others don't have. For this month, Amgen stock checks out fine.