I will be the first to admit, I'm pretty skeptical of solar companies being a great long-term investment. That skepticism comes from being burned three times by investing in a solar manufacturer. That being said, if I were ever to consider investing in solar again, SunPower (NASDAQ:SPWR) is the one company that appears to have the brightest future.

The company's most recent analyst day was an eye opener for an investor who has turned a blind eye to the industry the past few years. In taking in the company's presentation, three slides really caught my eye. If SunPower is to succeed, it will do so based on the following three reasons, which are adapted from that presentation.

1. Unbelievable untapped market potential
When you look at the market potential for solar it really has staggering potential. SunPower has just captured 0.01% of its total addressable distributed generation market. A tenfold increase brings that up to just 0.13% of its addressable market. That's meaningful growth potential not just for SunPower but for industry peers such as First Solar (NASDAQ:FSLR). As the saying goes, a picture really is worth a thousand words, and the below chart speaks volumes:

Both SunPower and First Solar not only have impressive distributed generation market potential but both have an enormous power plant market to tap. Just this year SunPower signed a massive 579 MW solar power deal with MidAmerican Solar, which is a subsidiary of Berkshire Hathaway. The deal could be worth up to $2.5 billion according to the company. Meanwhile, First Solar has signed several solar power plant projects including a recent 139 MW deal in Arizona. As you can see in that above chart, there is vast untapped potential for both companies to pursue large-scale utility projects as well as massive potential growth for distributed generation systems.

2. Lifetime energy advantage
What really struck me when looking at SunPower is how good its product is when compared to competing products. Because of overcapacity, the solar panel industry has become highly commoditized which has stunted innovation. SunPower, on the other hand, has developed a premium product which isn't just slightly better; it's twice as good. Take a look at the following chart and see what I mean: 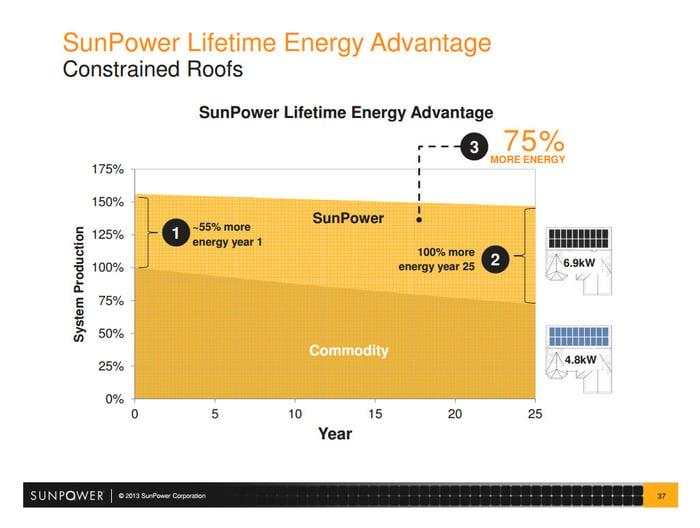 Not only does the system generate 55% more energy in the first year, but after 25 years customers will be enjoying twice the clean energy than if they'd purchased a commodity panel. That technological breakthrough is truly impressive.

3. Leasing model economics
As a consumer, the idea of going green and saving money is a true win-win proposition. That's why SunPower's Energy Solutions leasing model is a real game changer. A consumer can have a SunPower system installed at no upfront cost, enjoy 20 years of clean energy, and still save money on the utility bill. As you can see from the sample bill below, the savings can be significant: 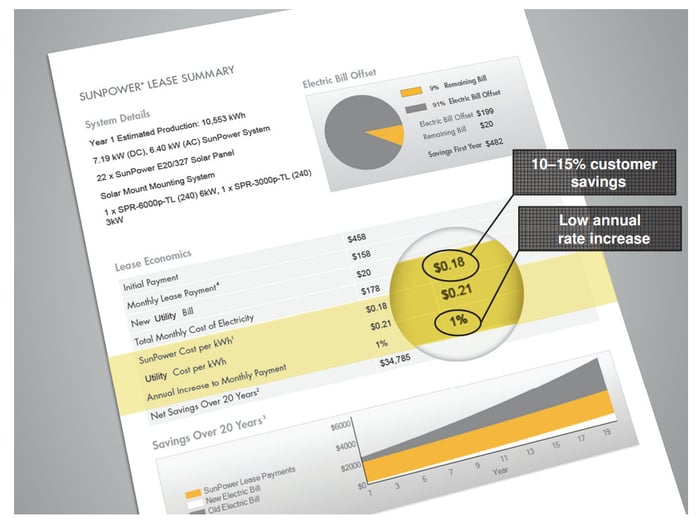 What's really intriguing is that today a customer can save between 10%-15% on their electric bill while going green at the same time. While that shows substantial savings, SunPower could widen that gap even further in the future as its works to bring down system costs while further improving efficiency. The company's goal is to improve efficiency by 10% while decreasing panel costs by 35% by 2015. As it accomplishes these goals, the company could improve its value proposition to its customers even further.

Foolish bottom line
SunPower appears to have a very bright future. With a massive addressable market, a breakthrough product and compelling economics, the sky really is the limit. That being said, solar is a tough industry that has been known to burn its share of investors, so I think I'll watch this one a little while longer.