Hold on to your umbrella: The world is getting windier. A new report projects a 34% wind-power production increase in the next three years, boosted higher by new tax-credit rules. Putting politics aside, let's look at three companies poised to profit from wind's pick-up.

Profitable projections
The Energy Information Administration recently released a report outlining its revised projections for wind production over the next few years. New wind generation accounted for more capacity increase than any other energy source in 2012, and it doesn't look to be slowing down.

After Congress approved an extension to the "Renewable Electricity Production Tax Credit" in January, the cost-competitiveness of wind projects took a positive turn. In real terms, the EIA now expects wind production to increase as much as 34% by 2016. 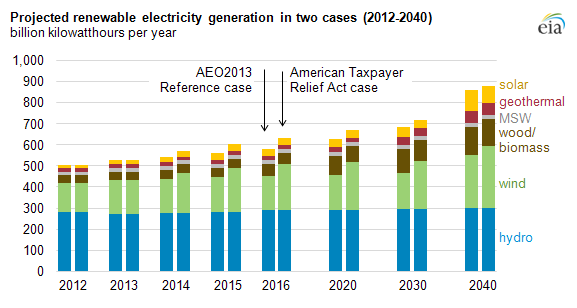 And while other renewable energies such as solar and biofuels will also benefit from this tax credit extension, wind wins the most, since "generate power by 2013" deadlines have been shifted to "begin construction by 2014" mandates for wind farms.

The iPhone of windmills
General Electric's (NYSE:GE) recent unveiling of its new wind turbine might not have caused the consumer hysteria that the iPhone did, but its market power and innovation rival the most tech-tastic new products around.

The 1.7 MW turbine is the largest, most efficient wind turbine to date. Smart technology and 100-meter blades increase overall power 6% above GE's previous 1.6 MW wind turbine, and the company already has orders in for its first batch.

GE sales depend on more than wind, but its "Power & Water" division accounted for 18% of overall sales in 2012. In its annual report, the company pointed to increases in wind turbine sales as the main driver behind a 10% boost in Power & Water's revenue.

Get those blades turning
GE is in the business of making wind turbines, but utilities are the ultimate owners and operators. NextEra Energy (NYSE:NEE) has ordered 59 of the company's new turbines, adding more capacity to its 10,000 net MW of wind across 100 wind farms.

NextEra has benefited enormously from past production credits, and this newest extension will be more of the same. As the largest generator of both wind and solar in the U.S., more wind means more economies of scale for this ultra-green utility. 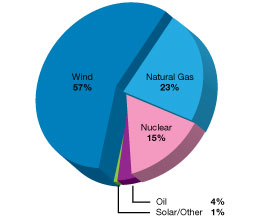 Atlantic Power (NYSE:AT) isn't going to win any economies-of-scale awards, but the utility is determined to ramp up investments in renewables over the next few years. In 2012, Atlantic added three wind farms with 150 net MW to its assets via a subsidiary acquisition from Veolia Environnement.

Its renewables ramp-up was a major contributor to its pleasantly surprising Q1 results, and the company currently owns just over 350 net MW of wind power .

Wind for the win?
Investing on the government's dime is hardly a sustainable or wise decision. Tax credits exist today, but political battles could bring wind production to a standstill in future years. Nevertheless, past and present production tax credits are having their intended effect. Technology is improving, companies are achieving economies of scale, and U.S. electricity production is slowly but surely turning a hazy shade of green. These three companies are winning from wind today and, with a bit of a boost and time, could keep blowing profits into your pocket for years to come.