U.S. stocks finished in positive territory on the first trading day of the month of June, as the S&P 500 (SNPINDEX:^SPX) rose 0.6%, while the narrower, price-weighted Dow Jones Industrial Average (DJINDICES:^DJI) gained 0.9%.

Such gains would normally coincide with a fall in the VIX (VOLATILITYINDICES:^VIX), Wall Street's fear gauge, but the index was essentially unchanged on the day, closing at 16.28. Perhaps option traders were accounting for the S&P 500's swings in and out of positive territory today. (The VIX is calculated from S&P 500 option prices and reflects investor expectations for stock market volatility over the coming 30 days.)

Are dividend shares at risk?
As the Federal Reserve and other major central banks crushed short- and long-term interest rates in the wake of the financial crisis, rendering government bonds and cash unattractive, investors piled into assets that could provide them with some incremental income. High-dividend-yield shares were one of the main beneficiaries of these flows; however, that trade may now be coming to an end.

Let me enter into the evidence the following graph, which shows the price performance, beginning on April 1, of three sectors offering among the highest dividend yields in the market: 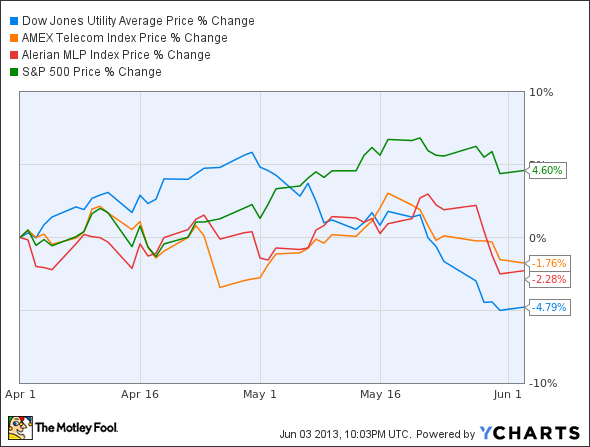 The underperformance, relative to the S&P 500, is apparent, but it's nothing compared with that of another group of high-yielding shares, mortgage REITs, the largest of which -- Annaly Capital Management (NYSE:NLY) and American Capital Agency (NASDAQ:AGNC) -- are down 14.8% and 22.5% over the same period.

What's going on with the "income trade" that was heretofore successful? Why are these stocks underperforming? The answer lies with investors' changing interest-rate expectations. Over the past couple of months, the market has come to believe that the Fed will curtail its quantitative easing (bond-buying) program and raise interest rates earlier than previously anticipated. Witness the 10-year Treasury yield, which shot up from 1.63% to 2.16% last month. As interest rates normalize, the premium investors are willing to pay for income-producing shares will fall. If it provides further evidence of a pick-up in economic activity, Friday's U.S. employment report could put another nail in the dividend income trade.