What do Amazon.com (NASDAQ:AMZN) and Domino's Pizza (NYSE:DPZ) have in common? Both companies will now deliver food to your door in Seattle and Los Angeles, after the former company expanded its AmazonFresh grocery deliveries to only its second metropolitan area. Beyond that, there isn't much similarity between the two companies -- yet. However, in a few years, the men and women who schlep the hot pizza or cold produce to your door in hopes of a decent tip might just be replaced by unmanned drone helicopters.

Surprisingly, Domino's jumped on this delivery trend first, but you can be sure that an online sales powerhouse like Amazon will be all over drone shipments as soon as possible.

Pie in the sky
Domino's UK arm teamed up with the very obviously British creative agency T + Biscuits to develop a fascinating demo video of a "DomiCopter" taking to the sky with a piping-hot pie:

There are some caveats, of course -- for one thing, the eagle-eyed viewer will notice that one pizza goes in but two come out -- but the promise of unmanned delivery has been one of the most interesting possibilities of civilian UAVs ever since the machines began moving beyond the battlefield. I've been discussing this possibility for over a year -- one of my top tech trends for the next five years (starting from 2012) was the proliferation of autonomous systems, including automated delivery bots, and this is certain to happen quickly once UAVs gain commercial operating clearance in the U.S. around 2015 or so.

There's a reason Amazon delivers groceries in only two metro areas after more than 15 years in operation, and those reasons are more or less the same that keep the radius of pizza deliveries so narrow. Deliveries cost money -- even if a pizza franchisee offloads the responsibility of vehicle upkeep to its drivers, there's still the matter of salaries and any potential liability issues, and the wider the range, the less efficient the driver. The costs of shipping can be even higher for Amazon, which charges up to $10 for grocery deliveries in Seattle -- and that doesn't even touch on Amazon's margin-slaughtering Prime subscription service.

Unmanned advantages
If you don't think that Amazon, Domino's, and virtually every other company that makes money from shipping something to your door will eagerly switch over to UAV delivery at some point in the not-too-distant future, let's do a little bit of hypothetical calculation.

Let's say that all a delivery-based company pays for at present is the cost of a driver's salary. Amazon's total costs for FedEx (NYSE:FDX) or UPS to get a package from Point A to Point B can add up on a Prime subscription, but for simplicity's sake let's focus on its grocery business right now. (FedEx founder Fred Smith has been talking about using unmanned cargo freighters for the air-bound leg of a package's journey for at least four years now -- former Wired editor and current robotic start-up honcho Chris Anderson reported as much on his blog in 2009 -- so he clearly sees value in delivery automation as well.) I'll return to package delivery a little further on, but the pizza comparison will be fairly easy to make, because the economics are fairly straightforward, and you've already got the picture of a little robot-transported pie in the sky stuck in your head anyway.

Let's say that the driver's salary is about $8 an hour, but the costs of maintaining a UAV are half that on an hourly basis. Even if a company buys its UAV outright, tacking on (and this is a very rough estimate) $25,000 in purchase costs instead of contracting with a UAV specialist, the long-term cost advantage of UAV delivery becomes very compelling very quickly, especially if a UAV provides just one delivery per hour as an advantage over its human peer.

Here are the basic assumptions:

So how long would it take those UAVs to become better delivery-service values than their fleshy, earthbound counterparts? 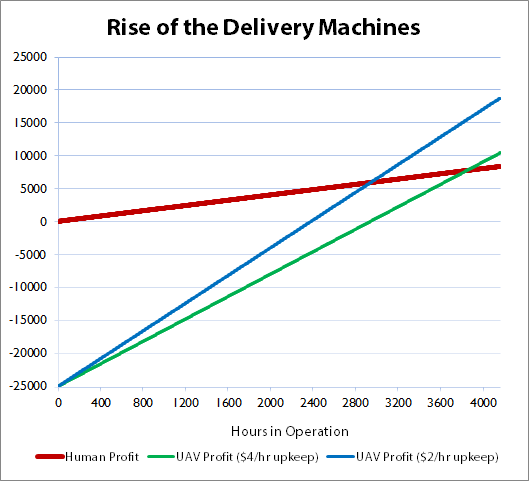 Author's calculations are assumptions only.

A company making deliveries eight hours a day, seven days a week would see an advantage in the cheaper UAV after just one year. The costlier UAV would become profitable in the spring of its second year in operation, assuming we start tracking from the beginning of January.

Admittedly, these are all very rough assumptions, and UAVs may wind up being initially more expensive on an hourly basis than their human counterparts. There are also a lot of extraneous factors, like unlimited free deliveries from Amazon Prime, which would throw a monkey wrench into these assumptions. Replacing ground transportation with aerial point-to-point delivery would, at the very least, broaden the cost-effective range of a pizzeria. Smaller drones won't be able to replace UPS drivers and their multi-ton trucks right away, but a concerted development push from drone-friendly executives like Fred Smith and Chris Anderson would certainly be able to devise an unmanned delivery vehicle with superior economics to the big brown trucks over time.

But here's what I'm getting at -- over the long run, automated delivery will wind up being cheaper than human delivery. It won't matter if these deliveries are ultimately undertaken by UPS and FedEx as a service to Amazon or by Amazon directly to cut out the middleman, or if new UAV contractors will spring up to help local restaurants deliver piping hot food rather than those restaurants operating the UAVs themselves. Technology gets cheaper rather quickly. The cost of an employee does not.

Dangerous times
"But wait!" you might say, "what will happen to all these delivery folks after the robots make them as obsolete as 18th-century loom weavers?" I'll be honest: I don't know. There are a lot of delivery folks at work in the United States. Even if we assume that larger objects will still require some ground-based delivery method, it doesn't protect the vast majority of people from other innovations like the Google (NASDAQ:GOOGL) self-driving car, which is already street-legal in California  and Nevada. An automated delivery vehicle might eventually have an automated delivery robot on the back that can pick up a 500-pound box with ease. There's no reason why automation need be limited to taking things from Point A to Point B.

There are a lot of delivery folks -- and delivery-infrastructure folks -- at work in the United States. Some of them might become drone maintenance techs, or drone programmers, but many will not, because the tech industry isn't really as big a part of the American employment picture as most people think:

When part of the economic infrastructure becomes more efficient, a number of workers become redundant. They'll have to go somewhere and find other work. In the short run, it'll be great for Amazon, Domino's, and all the other companies that rely on deliveries for their revenue to have fewer people to pay and more efficient delivery methods to use. In the long run, many of the roughly 4.5 million Americans at work in transportation will be out of work -- and that means fewer orders for Amazon products, fewer purchases of delivery pizzas, and fewer incomes feeding into the American economy.

The problem with automating everything isn't the technical challenge involved. It's the challenge of finding people made redundant a new job that can still support the economy. Everyone can't be a drone mechanic or a drone programmer. So what will they be, when they can't make deliveries anymore?