The cost to fill a tank of gas is one of the single biggest expenses most families have aside from the cost of housing. When the cost of gas goes up, it puts a strain on our bank accounts, and when it falls it's a small reprieve.

So, long term, the cost of gas and oil is very important to the economy, and for the past decade the cost has been moving higher. The good news is that demand for oil has been falling, U.S. production is rising, and alternatives are becoming a reality. With those facts in mind, here are the three biggest reasons gasoline won't move much higher and why I think we'll never see $5 per gallon at the pump.

Demand is falling
Demand for oil and gas in the developed world has been declining for nearly a decade, and the pace is increasing. The biggest factor driving down demand for oil isn't that people are driving less; it's efficiency in the miles we are driving. A decade ago, SUVs and massive trucks were the most popular wheels on the road; today, small cars, hybrids, and even electric vehicles are replacing them. 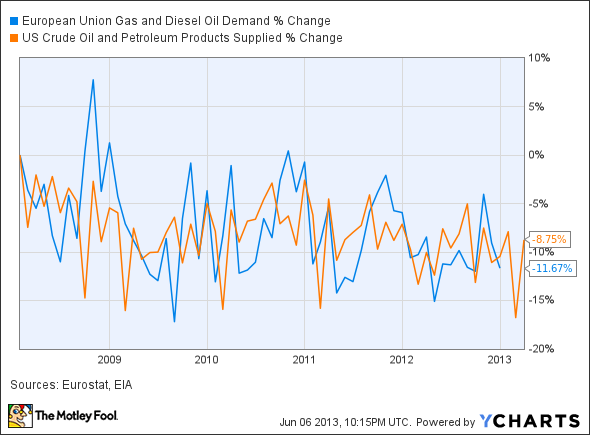 Long-term, this trend will only continue. The Obama administration has rolled out a 54.5-mile-per-gallon corporate average fuel economy standard for the auto industry, which will take effect in 2025. Not every vehicle will get 54.5 miles per gallon, but fleets have to improve efficiency dramatically, and as they do, demand for oil both in the U.S. and internationally will fall.

Oil isn't as inelastic as it used to be
It used to be that oil could climb continuously and people would pay whatever it cost, with little alternative. In economics we call that situation inelastic demand, and it's why OPEC had such power over the global economy.

But over the past decade, the elasticity of oil has increased, and alternatives have a lot to do with it. Clean Energy Fuels (NASDAQ:CLNE) is supplying buses and local trucks with natural gas at a lower cost than diesel, and the company is building a national infrastructure for the trucking industry. Westport Innovations (NASDAQ:WPRT) is providing the technology to bring that natural gas to the trucking industry, saving money over diesel and lowering demand from one of the biggest users of oil.

More concerning for oil companies should be the wild success Tesla Motors (NASDAQ:TSLA) has had selling electric cars. Tesla won't electrify the entire auto fleet overnight, but it's now proved that EVs can be a success, something that was a pipe dream just a few years ago. Chevy and Nissan have given EVs a go with little success, but Ford has a decent car on its hand with the Ford Focus Electric. Mercedes and Toyota are also trying their hand at electric vehicles, and they're calling on Tesla to design the drive train.

An electric vehicle may not make sense today, with gas averaging $3.64 nationally, but if it jumped to anywhere near $5, you can bet millions of people would consider going electric. Long term, as technology improves, EVs will continue to take share, reducing oil demand and providing an alternative that puts a cap on how high gas prices can go.

Supply can turn at at the drop of a hat
When OPEC commanded the world's oil market and prices were inelastic, it could control supply and prices as well. But the oil-supply business is no longer the monopoly it once was, with ultra-deepwater offshore drilling growing and fracking expanding in the U.S. and abroad.

What has become more elastic than demand for oil is the supply. When oil flirts with $100 per barrel, companies scramble to drill more wells, and when it falls, they cut down on capital spending. Fracking can cost $70 per barrel just to produce oil, so supply shuts off if prices get too low. But the reverse is true, and when demand goes up, supply suddenly hits the market. 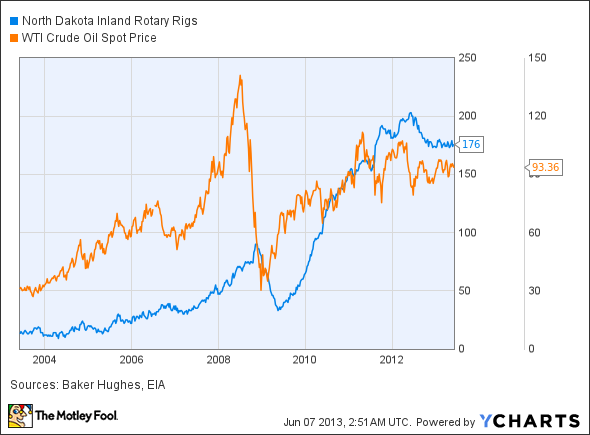 Of course, increased drilling in North Dakota does have its side effects. Regional price spikes are getting worse, and depending on where you live, you may be thinking that gas-price relief hasn't hit your pocketbook. The Midwest and California have seen unusually high gas prices this year, but that's largely driven by regional refinery outages and a lack of infrastructure to get oil from new wells to refineries. But overall, gas prices nationally have been flat for about two years. 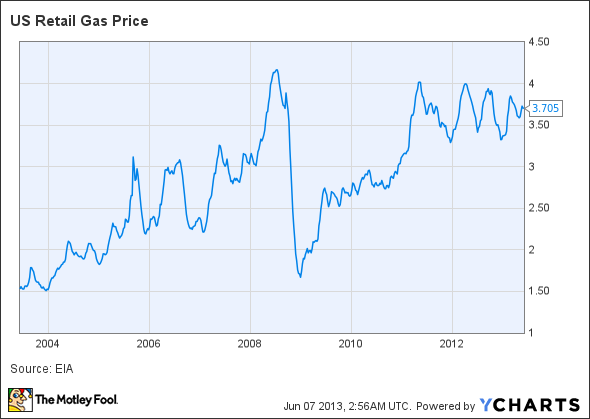 Foolish bottom line
When we look at the national and global picture, there's beginning to be a lot of downward pressure on oil and gasoline prices. Lower demand, increased supply, and alternatives from other energy sources are just a few of those factors. We have yet to hit $5 per gallon of gasoline nationally, and with the macro trends I'm seeing, I don't think we ever will.