First Solar (NASDAQ:FSLR) asked for another infusion of cash this week, and with one of the best balance sheets in solar, it's reasonable to wonder why the company needs more money from investors. It ended last quarter with $1.3 billion in cash, restricted cash, and securities, and just $562.2 million in long-term debt, better than every other publicly traded company in solar.

Yesterday, the company announced a public offering of 8.5 million shares, 9.8 million if underwriters exercise their overallotment, which will raise $450 million at the $46 offer price. But why does a company with a solid balance sheet need so much money?

One of the challenges for solar companies building projects is the amount of money put into projects before they're sold. First Solar is building the $2 billion Topaz Solar Farm in California and the $1.8 billion Agua Caliente project in Arizona right now, requiring a lot of capital to complete. Inventory, construction costs, and operating costs before the project is turned over to new owners, requires capital.

SunPower (NASDAQ:SPWR) made a similar move in late May when it offered $300 million of convertible notes, due 2018. The notes carry a low interest rate of 0.75%, but can be converted into shares of SunPower stock at $24.95 per share if shares trade above that level by then. So, this wasn't a full-share sale like First Solar's announcement, but it's dilutive nonetheless.

Both companies are looking at these offerings as a way to shore up balance sheets and prepare for investments in project and lease developments in the future.

Investing in the future
First Solar may also be planning to build production based on its TetraSun acquisition. The start-up company would use a manufacturing process very different from First Solar's thin film, and would likely require hundreds of millions in capital investment to launch.

Or First Solar may just be extracting capital from the markets after a fast stock run-up. 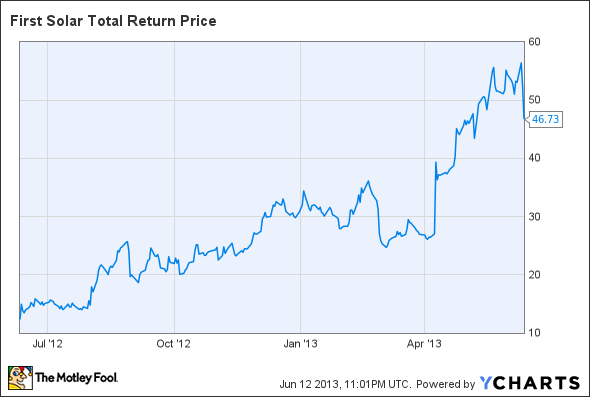 The solar market has been volatile, and we're far from being certain about long-term winners and losers. If a company can pull some cash when the stock is high, I say more power to them. My hope is that First Solar has some big plans, and this is the start of a long run higher for the stock.