With 85% of all global transactions still being facilitated with cash and MasterCard free of all credit default liability, it represents the perfect way to play the financials sector over the long term.

Four weeks ago, I outlined my plans to create a portfolio of 10 companies that all have one thing in common: They provide a basic need or deliver life's necessities. It's my contention that basic-needs companies can offer investors stability and growth throughout any market environment thanks to consistent demand, incredible pricing power, and delectable dividends. This portfolio, which I have dubbed the Basic Needs Portfolio, will be pitted against the S&P 500 over a period of three years with the expectations of outperformance for all 10 stocks. I'll be rolling out a new selection to this portfolio every week for the next six weeks.

You can review my previous three selections here:

Today, I plan to introduce the fourth of 10 selections to the Basic Needs Portfolio: MasterCard (MA 0.76%).

How it fits with our theme
I fully expect MasterCard to be a bit of a head-scratcher at first for most investors since financial companies tend to be some of the most susceptible to economic downswings. As is usually the case in a recession, banks see their deposits and loan generations slow, while financial service and brokerage companies often derive less service revenue. On the surface, that isn't exactly a confidence boost for a credit service company like MasterCard. But, I plan to prove that theory dead wrong.

In fact, MasterCard and its peer Visa (V 0.97%) are possibly the only two near-perfect financial companies to take advantage of in any economic environment. When the economy is booming, consumers are certainly more apt to break out their credit card. Conversely, barring a depression, consumers are also likely to turn to credit in order to facilitate their basic needs purchases through tough times. Aside from an exceptionally small downward blip between 1990 and 1993 and a two-year drop of about 6% during the most recent recession, total consumer credit levels have been on a steady incline over the past 70 years, rising from $5 billion in 1943 to more than $2.8 trillion in June 2013, according to data from the Federal Reserve. 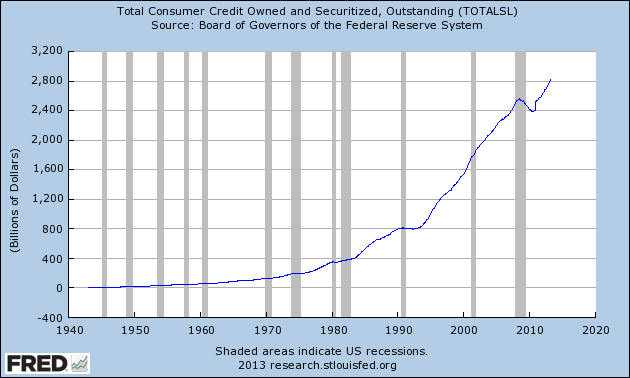 The most important aspect about MasterCard and Visa is that they're nothing more than payment processing facilitators. This means they don't actually lend the money out -- they merely act as the middleman between the vendor and the credit company or bank that provides the "loan" to the consumer -- which completely protects them from credit defaults. If that's not the perfect basic-needs scenario, I'm not sure what is!

The risk
I've said it before, and I'll say it again; there is no such thing as a riskless investment! Even MasterCard and Visa bear some risk. For MasterCard, the two greatest risks it'll face are the potential for a global depression and increasing levels of competition.

Although 70 years is certainly a long enough timeline to establish that consumer credit usage only tends to go up, a very deep recession or perhaps even a depression could be enough to get consumers to holster their credit cards altogether. In addition, deep recessions have a way of harming consumers' credit to the point where they don't have access to a credit card, or in some cases, even a bank card. This is one reason we've seen such a proliferation of prepaid debit cards over the past couple of years. Green Dot (GDOT 1.37%), for example, has been largely successful in wooing prepaid consumers through its partnership with Wal-Mart. If consumer credit quality struggles, prepaid cards could be turned to in even greater numbers, which would be great for Green Dot, and not nearly as good for MasterCard.

Competition is another concern for MasterCard. American Express (AXP 0.14%) and Discover Financial Services (DFS 0.06%) are payment facilitators as well, but they also double as lenders. AMEX and Discover's ability to double-dip as processor and lender allows these companies superior margins to MasterCard and Visa when times are good. However, when a recession rolls around, both AMEX and Discover can succumb to the liability of default associated with being a lender.

Why MasterCard?
Despite the risks, and the assumption that financial companies would make a nightmare long-term hold through tough financial times, I feel MasterCard represents everything the basic needs portfolio is seeking.

First, MasterCard is part of a steadily rising trend of credit card usage thanks in part to record low lending rates in the U.S. and low lending rates in many other parts of the world. What you have to understand is that credit usage isn't just being defined as "within the U.S." There is literally a world of opportunity out there for MasterCard to penetrate. According to its CFO Martina Hund-Mejean, 85% of all global transactions are still done in cash, leaving what could be decades of double-digit growth opportunities for MasterCard and Visa.

Emerging market nations represent a particularly strong growth opportunity for MasterCard because these countries can grow independent of many developed regions like North America and Western Europe. That means a global slowdown in developed nations isn't likely to slow growth in emerging markets and should translate to increased payment volumes for MasterCard.

MasterCard is also extremely well financed, which is the primary factor that coerced me to select it over its rival Visa. MasterCard ended its most recent quarter with better than $40 in cash per share ($5 billion), which equates to about 7% of its current market value. By comparison, Visa ended its latest quarter with $4.18 in cash per share ($2.7 billion), or about 2.3% of its market value. I see MasterCard being better able to return cash to shareholders through share buybacks and dividends at a faster rate than Visa despite Visa's size advantage. MasterCard actually doubled its quarterly payout to investors earlier this year to $0.60 per share from $0.30, although the yield is a mere 0.4% thanks to strong share price appreciation since 2009.

MasterCard will likely be the slouch in the dividend department of this portfolio, but I'll gladly take it if transaction volume growth remains in the double-digits and U.S. consumer credit card usage continues to climb.

Stay tuned next week, when I'll unveil the fifth selection to the Basic Needs Portfolio.

The Motley Fool owns shares of, and recommends, MasterCard. It also recommends American Express and Visa. We Fools may not all hold the same opinions, but we all believe that considering a diverse range of insights makes us better investors. The Motley Fool has a disclosure policy.