Other than the occasional short squeeze, nothing drives Netflix (NASDAQ:NFLX) stock so much as exclusive content. But don't take my word for it. Witness what happened after House of Cards and Hemlock Grove pushed viewing hours to new highs. (More than 4 billion, according to the latest data.)

Netflix stock has more than doubled year to date and is up nearly 250% since last summer. 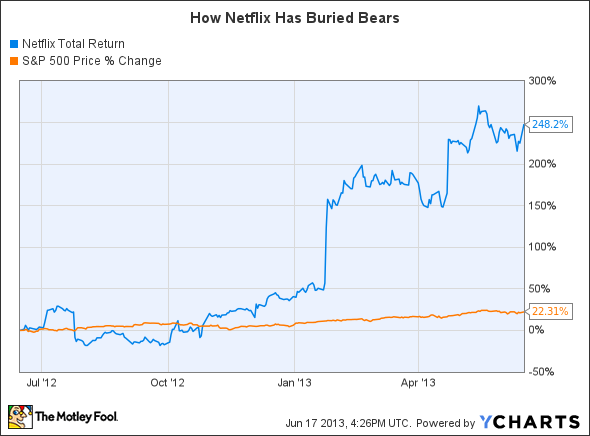 If original content is at least partially responsible for the rally, then the natural question for investors is: What's next? We know Jenji Kohan's Orange Is the New Black is on the way. Other in-development projects include a second season of House of Cards and Sense8 from the Wachowskis and J. Michael Straczynski of Babylon 5 fame.

And after that? Surely there are other small projects in the works, plus a rotating schedule of exclusive content that includes a big deal with Walt Disney (NYSE:DIS) for rebroadcasting of the highly successful Marvel films. (The Iron Man franchise alone already accounts for $2.4 billion in worldwide box office receipts.)

But it'll take years to get all those movies. In the meantime, resuscitating popular but recently canceled television shows could become a catalyst for Netflix stock even as Amazon.com (NASDAQ:AMZN) sharpens its focus on five originals: two adult comedies (i.e., Alpha House and Betas) and three kids' shows (i.e., Annebots, Creative Galaxy, and Tumbleaf).

To be clear, I'm not talking about doubling down on Arrested Development. I'm talking about newer shows with a niche following, such as The Killing. Here are three canceled shows whose earlier seasons are already available on Netflix:

Skeptics will argue that Netflix would do better developing entirely new properties. Trouble is, promoting new shows isn't cheap. Netflix spent $129 million on marketing in the first quarter alone, about even with last year's Q1. A rush of newer originals could make it harder to keep a lid on costs.

Cult hits such as Warehouse 13 don't need the same marketing support. Think about it: McClintock and co-stars Joanne Kelly, Saul Rubinek, and Allison Scagliotti have already won over the more than 800,000 who have rated the show on Netflix. That's a powerful tailwind, one that might prove better at boosting Netflix's bottom line than would investing in an untested idea.

Now it's your turn to weigh in. Would you have Netflix bring back any of these shows? Leave a comment to let us know what you think, and whether you would buy, sell, or short Netflix stock at current prices.