The StressTest column appears every Thursday on Fool.com. Check back weekly and follow @TMFStressTest.

We'll have a tough time saying exactly how much of an impact this will have thanks to the fact that banks can pull some different levers to try to offset these losses. But we're not completely out at sea, here, either. In the second quarter of 2004, the 10-year rate jumped from 3.86% to 4.62%, while the 3-year rate went from 1.99% to 3.16%. So we can look back at that period and see how banking balance sheets fared.

In short, the answer is that they fared poorly. By focusing in on the "other comprehensive income" (OCI) -- which includes unrealized gains (and losses) from investment securities -- we can see just how much that rate jump hammered the banks.

This is all very back-of-the-envelope and may not be a perfect apples-to-apples comparison across banks. But JPMorgan, at least, left little doubt as to what happened in the second quarter of 2004. In a footnote to its breakdown of OCI changes, the bank noted: "The net change for the six months ended June 30, 2004, is primarily due to rising interest rates."

Fast forward to today, and it's readily apparent that similar loss levels would be extremely painful. The banks' debt portfolios are much larger than they were in 2004 -- Wells Fargo's, for instance, went from $37 billion to $248 billion. Per bank, we're easily talking about billions of dollars, perhaps $5 billion or $6 billion on the upper end.

What's worse is that interest rate spreads have recently been tighter than in 2004, and new regulations have taken a bite out of some fee income. That means that -- compared to nine years ago -- there's less potential profit on the income statement to offset the balance sheet weakness.

What will be revealing in seeing the actual numbers is the ways in which each bank positioned itself in anticipation of rising rates (I mean, come on, who didn't see this coming?). Holding debt securities with shorter maturities, for example, could lead to significantly lower loss levels versus 2004. Investors in the sector will want to keep an eye out for banks that break from the pack -- either showing larger or smaller proportional losses. That could provide some insight into which management teams have their heads screwed on straight.

The upshot to this is that while the second-quarter earnings reports may include some ugly items, the rate movements over the past quarter will actually be a positive for the banks over the longer term. Spreads widened during the quarter -- that means the long-term rates rose more in relation to short-term rates. This is a distinct positive for banks since they make much of their money via those rate spreads. Higher rates in general are a positive as well. In its first-quarter SEC filing, JPMorgan noted that a 100-basis-point increase in interest rates would lead to a $2 billion increase in annual pre-tax net interest income. A 200-basis-point increase would boost net interest income by $3.7 billion.

Even when we compare the rate action over the past quarter to 2004, there are positives. In 2004, some parts of the yield curve were starting to flatten -- that is, basically the opposite of the spread-widening situation that I outlined above. 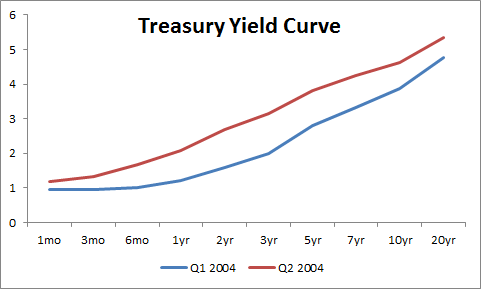 Source: U.S. Department of the Treasury.

The rate gains this year have been distinctly the good kind (if you're a bank), leading to a steepening curve. 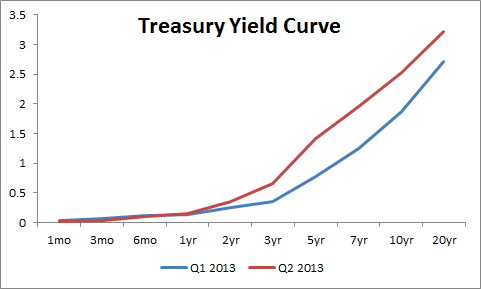 Source: U.S. Department of the Treasury.