Your fault
We're inundated with financial information these days. But Shane Parrish of the blog Farnam Street says inflation overload doesn't exist, quoting from the book The Information Diet:

Information overload means somehow managing the intake of vast quantities of information in new and more efficient ways. Information overconsumption means we need to find new ways to be selective about our intake. It is very difficult, for example, to overconsume vegetables.

Crystal balls
Carl Richards writes about our abysmal ability to predict the future:

Forecasts about the future of the market are very likely to be wrong, and we don't know by how much and in which direction. So why would we use these guesses to make incredibly important decisions about our money?

That's right. You shouldn't because you know better, and relying on what's really just a hunch is an all but guaranteed recipe for financial pain.

Wisdom
Jason Zweig tries to save investors from themselves:

And while people need good advice, what they want is advice that sounds good.

The advice that sounds the best in the short run is always the most dangerous in the long run. Everyone wants the secret, the key, the roadmap to the primrose path that leads to El Dorado: the magical low-risk, high-return investment that can double your money in no time. Everyone wants to chase the returns of whatever has been hottest and to shun whatever has gone cold. Most financial journalism, like most of Wall Street itself, is dedicated to a basic principle of marketing: When the ducks quack, feed 'em.

Checks keep coming
Eddy Elfenbein writes on the amazing growth of dividends in the S&P 500 (SNPINDEX:^GSPC):

S&P reported that dividends for the S&P 500 grew by 15.49% in the second quarter. This was the tenth-straight quarter in which dividends have risen by more than 12%.

This is especially impressive because it comes after the dividend surge from Q4 when dividends rose by 22.77% in an effort to beat higher taxes.

For Q2, the S&P 500 paid out index adjusted dividends of $8.61. Think of it this way: The S&P 500 is currently about 1,625. Every month, it pays out about three points' worth of dividends. For all of 2013, the dividends paid out will be roughly double what was paid out ten years ago.

Rebound
Great news for General Motors (NYSE:GM) and Ford (NYSE:F): Pent-up demand is breaking through, and auto sales are now back to pre-recession levels. From the blog Calculated Risk: 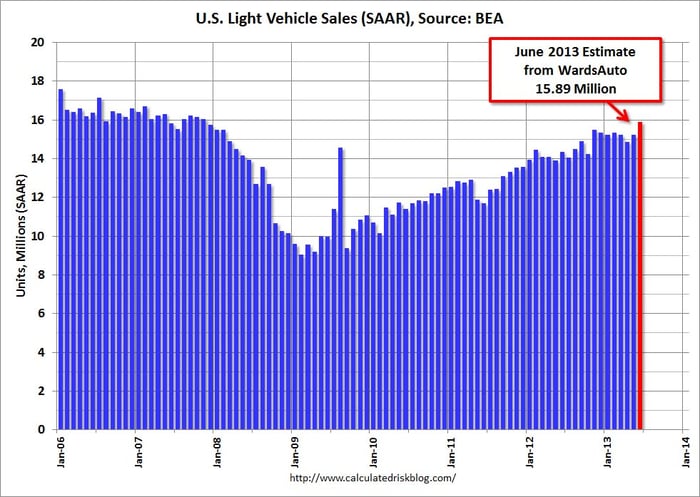 Between a golden rock and a hard place
The Wall Street Journal writes about what falling gold prices are doing to gold miners:

On top of falling metals prices, miners face rising costs. The cost of mining an ounce of gold rose to $775 in 2012 from $280 in 2005, according to BMO. That has left many miners spending more money than they are earning. The shortfall was addressed by raising funds with bonds and shares, but those markets are getting increasingly harder to access.

As much as nostalgists might like to protect the collecting hobby with the type of clear cellophane case that keeps vintage cards from aging, interest has faded from its peak period.

"The standard card is no longer a draw enough for an average baseball fan," said Tom Bartsch, the editor of the Sports Collectors Digest. "It won't ever be what it was. It's a different culture now." ...

Berkus estimated that the amount of money from card sales across the country each year has declined by nearly two thirds from its peak. Illustrating the trend is the reduction in the number of manufacturers licensed by Major League Baseball to one this season, from five during collecting's heyday, though at least two other companies still churn out cards.

Education
Got 45 minutes? Billionaire investor Bill Ackman will tell you everything you need to know about finance: