Take a look at this chart. It shows the monthly flows to bond mutual funds over the last two years. See if you can spot the outlier: 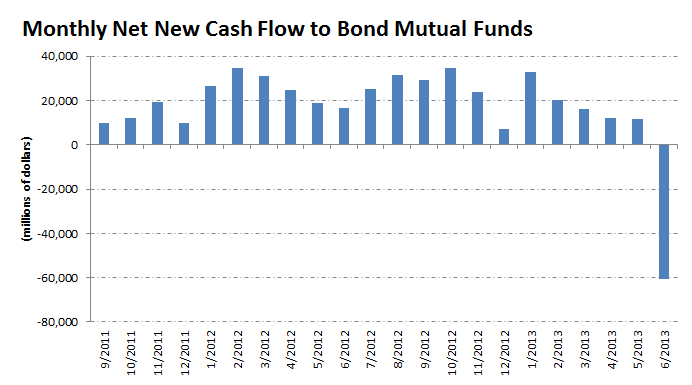 That's understandable. Interest rates are rising, and for the first time in years, bonds are losing money. The PIMCO Total Return Fund is down 5.6% since April. The Vanguard Long Term Corporate Bond ETF (NASDAQ:VCLT) is off nearly 10% in the last three months. The popular iShares Barclays 20 Year Treasury Bond ETF has lost more than 11% in the last 90 days.

But what's interesting -- maybe scary -- to think about is that the rise in interest rates over the last month isn't that large, historically. Interest rates on 10-year Treasury bonds have increased by about 60 basis points in the last month, according to data from the Federal Reserve. In percentage terms, that's a lot. But interest rates are so low right now that percentage gains can be deceptive -- a doubling of interest rates from last summer's lows would mean a gain of only a little more than one percentage point.

In absolute terms, the rise in interest rates over the last month isn't that impressive:

If bond investors have panicked at what has been a pretty mild rise in interest rates, what will they do when rates really start to rise?

It won't be pretty. My guess is there will be a few more outliers on that first chart.