We are now a few weeks into the busy summer travel season, when major airlines make a significant proportion of their annual profit. Many airlines had a rough spring, due to a confluence of factors such as the calendar shift of Easter and Passover into March, a brief period of FAA furloughs that exacerbated airport delays, and tepid economic growth.

However, airline executives consistently stated that summer demand appeared strong. Based on the industry's unit revenue results for June -- the first month of the summer travel season -- it looks like the expected demand has materialized. However, with oil prices on the rise again, the industry could be hit with higher than expected fuel bills, dampening margins.

Unit revenue on the rise again
After every one of the five largest U.S. airlines reported unit revenue declines in April and all but one reported declines again in May, a strong June was critical for the industry. Fortunately, most carriers delivered last month. Here are the full results:

Of the five top carriers, only Southwest reported a unit revenue decline for June. This may be partially due to the company's upgauging initiatives; it is adding a row of seats to most of its planes, while also swapping out a number of jets seating 137 or fewer passengers for new Boeing 737-800 planes that seat 175. These actions tend to depress unit revenue, but they also reduce unit costs. In fact, Southwest was able to increase its system capacity 1.7% last month despite offering 4% fewer flights than in June 2012.

The industry's return to unit revenue growth last month was particularly encouraging because all of the major carriers but United Airlines increased capacity. Capacity increases tend to lower unit costs, but if demand is insufficient, the excess capacity hurts unit revenue. Fortunately, AMR, Delta, and US Airways seemed to have no trouble filling their extra seats in June, and United's capacity cuts did help it post the strongest unit revenue growth in the industry by far.

Oil prices on the rise
Unfortunately for the airlines, while the demand picture is beginning to brighten, fuel prices may become a headwind to costs again. While the price for Brent crude spent most of the spring in a trading range near $100 per barrel, it has jumped significantly in the past few weeks, surpassing $108 on Wednesday. 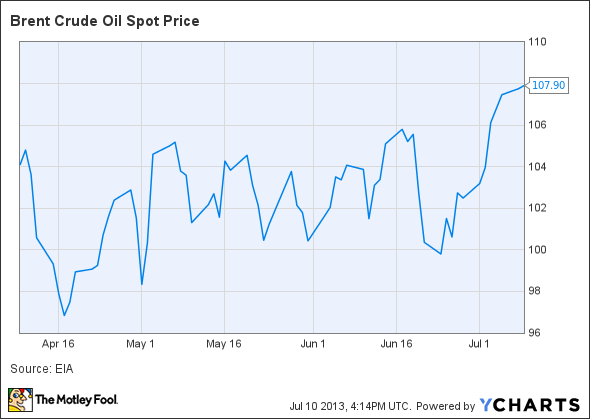 The Energy Information Administration's weekly oil report on Wednesday showed that U.S. crude stockpiles dropped by roughly 10 million barrels last week, similar to the previous week's drop. This data could provide fuel for further increases in oil prices in the next few weeks. The $8 per barrel price increase we have seen so far equates to $0.19 a gallon.

United, Delta, and the hypothetical merged American-US Airways will each use approximately 4 billion gallons of jet fuel this year. This recent oil price increase could therefore have a big impact on industry profitability in the second half of 2013 if it is not reversed.

A guessing game
The major airlines are starting to see improvement in unit revenue trends. If this continues throughout the summer peak season, it should support solid growth in industry earnings this year. However, oil prices remain a wild card. While U.S. oil production has been steadily increasing for the past few years, it has not put much of a damper on oil prices. If oil prices continue to rise, airlines could see much of their projected profit gains wiped away.