At its core, Caesars Entertainment (NASDAQ:CZR) is an extremely flawed company. It has a huge presence in the struggling regional gaming market, it has no exposure to gaming's biggest market, Macau, and it has $21.3 billion of debt strangling it. So how has it gained 130% this year, easily outpacing more profitable rivals? 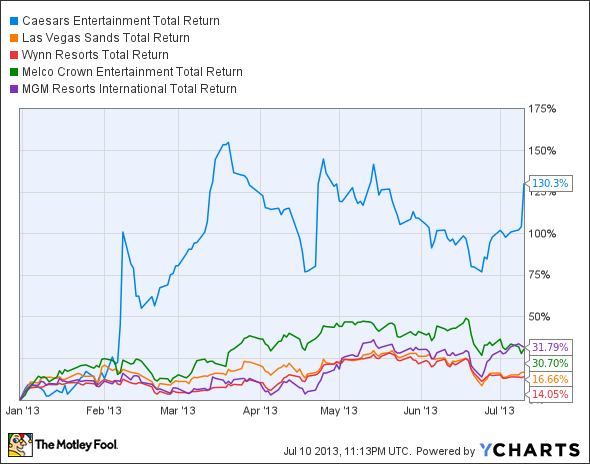 In my opinion, investors are buying into a great sales job by Caesars' management and private equity investors, and buying in now is a sucker's bet.

A raw deal for investors
The spinoff of "growth" assets that got investors excited yesterday has been in the works for months, and it's really nothing more than an asset sale. Caesars Entertainment will sell Planet Hollywood, The World Series of Poker brand, a future project in Baltimore, and whatever online gaming Caesars develops in the future to Caesars Acquisition, a newly traded stock.

But investors who by shares of Caesars today don't automatically get shares of Caesars Acquisition -- they get the opportunity to buy shares at $9.43, the same price as private equity owners Apollo Global Management and TPG Global, who have committed at least $500 million to the deal. The two funds will own at least 42% of the new company but it's likely they will exercise their full right to buy new shares so they aren't diluted by the deal. This is where the deal becomes a sweetheart for private equity and a stinker for investors.

Assuming Apollo and TPG fully exercise their rights to buy shares in Caesars Acquisition, any shareholder who doesn't exercise their right to buy shares in the new company, which would require new cash, will effectively be giving the two private equity groups a larger percentage of the new company. So, it's likely they'll own a larger percentage of the "growth" company than they do of Caesars Entertainment.

But this is a great growth company...
What I think a lot of investors are unaware of is that new cash is required to buy the new "growth" company. So, if you buy shares of Caesars Entertainment today for $16, you would have to put in another $9.43 to buy shares of Caesars Acquisition when it goes public. All-in, your investment would be $25.43.

At that point you will own two stocks and two companies. But is that really what you want? If you want to own the company that will own the online gaming assets, why not buy after it's publicly traded? Sure, you may have to pay $10 or even $12 for each share, but you won't be stuck with shares of Caesars Entertainment at $16 per share.