Many things have recovered since the Great Recession's lows of 2009: The S&P 500 (SNPINDEX:^SPX) passed its record high of 1565 earlier this year, the unemployment rate sits at 7.6% after slowly having floated down from its recessionary high of 10%, and even the housing market in Phoenix posted a 22% gain year over year.

But one industry continues to languish according to its own index: dry shipping. This industry just can't find its footing in the new post-recession world, with its Baltic Dry Index sitting at just a tenth of its boom-time high.

Just what is the Baltic Dry Index? Does its fall mean investors have a chance to grab a piece of a future recovery for cheap? To find out, let's look at why it bubbled up in the first place. 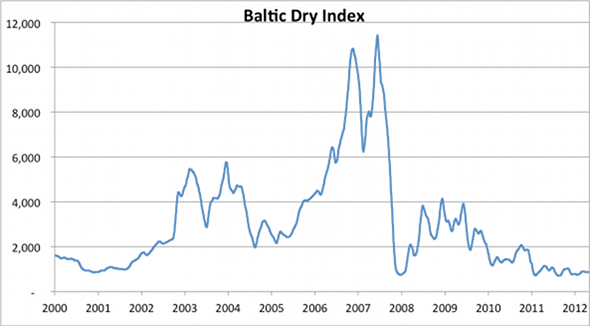 How can such an integral part of the global supply chain be so erratic? There are a few reasons. One, fuel makes up roughly 40% of operating costs, so when oil prices spiked in 2007, both the cost of shipping and the index jumped.

Two, commodity demand can affect the index, as a greater volume takes more ship capacity. Conversely, less demand means ships might look for capacity, and even help pay to ship commodities instead of running empty. Bloomberg quotes one shipper who paid $2,000 a day to cover part of a shipment's fuel: "Our other option was to stay in the Pacific and earn poor revenues or ballast to the Atlantic and pay the fuel ourselves."

And three, the index can be so erratic because supply in the dry shipping industry is relatively inelastic. This means that it takes a few years to build new ships, and if shipping demand increases or decreases, prices to ship goods will increase or decrease rapidly as well.

For example, when prices were high and companies, such as Diana Shipping (NYSE:DSX) and DryShips (NASDAQ:DRYS), ordered more ships, these ships were finally completed a few years later when shipping prices had already cratered. Now, Diana's fleet is on average only 6.4 years old, while DryShips' fleet is on average 7.4 years old, when the typical life of a ship is 25 years. While these young fleets might be good as an investment in the future if global trade picks up, today's troubled eurozone and slowing China will leave these newer ships wanting for higher demand.

Red sky at night, sailor's delight, red sky at dawn...
The questions that any investor in dry shipping must ask is whether trade will pick back up ahead of expectations if shipping capacity won't overrun future trade demand, and if these companies can survive in the near term. Unfortunately, the current data shows that shipping capacity is still growing at a little above 6%, while the World Trade Organization predicts global trade will only grow about 3.3% in 2013.

Even five years removed from the Baltic Dry Index's crash, bankruptcy risk is alive and well in 2013. Excel Maritime Carriers, once worth over a billion dollars, filed for bankruptcy just in the past month. Profits are hard to grab industrywide: DryShips losing $116 million this past quarter and Diana losing $3.2 million.

Remember there is no physics in the stock market. Just because the Baltic Dry Index once topped 11,000 doesn't mean it will ever return. But also know that once a dry shipper proves that it will be able to survive through one of the worst periods in industry history, its stock will be in high demand.