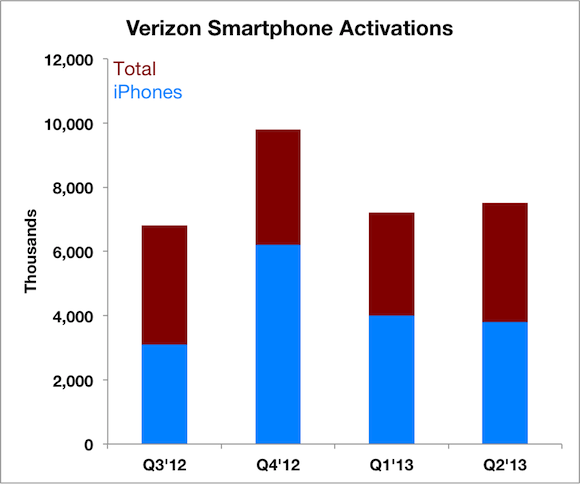 That's particularly impressive when considering that this was Samsung's Galaxy S4 launch quarter. HTC's One isn't expected to launch on Verizon until this quarter, and the Taiwanese OEM will face stiff competition within Verizon's lineup.

The iPhone activations were up 41% from the 2.7 million that Verizon Wireless activated a year ago, reiterating the fact that Apple's position in the U.S. market is rock solid. Apple's underperformance in growth relative to the global smartphone market is now very clearly due to exploding sales in emerging markets that Apple is missing out on.

This time around, Verizon didn't disclose the mix of LTE iPhones (i.e. iPhone 5 units) like it has done previously. Last quarter, half of the 4 million were iPhone 5 units, and the other half were older devices, like the iPhone 4 and iPhone 4S, which were still selling well at lower price points.

Now we conduct the typical exercise that investors like to do after carriers release figures ahead of Apple earnings: extrapolate to get a feel for Apple's total iPhone sales. Keep in mind that the result is always a wide range, and there are some drawbacks, but the activation figures do provide some clues.

Verizon's contribution to total iPhone sales tends to fluctuate around 11% to 12% most of the time. (This figure has been as low as 9% and as high as 13%.) Including every quarter that Verizon has sold iPhones, the overall average is 11%. Extrapolating based on that average implies that Apple may have sold around 34.5 million iPhones -- well above the Street consensus of around 26.7 million.

Using the historical high (13%) and low (9%) yields a potential range of 29.2 million to 42.2 million. That's quite a range, and the upper figure is simply unrealistic. The only way that Apple comes in near the low end is if Verizon is a large contributor to total iPhone sales relative to its historical trends.

T-Mobile (NASDAQ:TMUS) has just started offering the iPhone for the first time ever, and it's already surging. Third-party estimates pegged the iPhone at 31% of smartphone sales at the No. 4 carrier, and T-Mobile subsequently confirmed the iPhone was 29% of total smartphone sales in Q2 during its Jump event. This implies that Verizon might end up near the lower end of its contribution to total iPhones -- which, in turn, implies higher total iPhone sales for Apple.

Apple continues to fortify its domestic fortress. Now it needs to tackle emerging markets, but investors already knew that.