Over the last few months, mortgage rates have increased at a historically unprecedented pace. In one day alone earlier this month, they shot up by a larger magnitude than we see in most weeks. While they've since settled back down slightly, as you can see in the chart below, they're nevertheless dramatically higher than they were at this time last year. 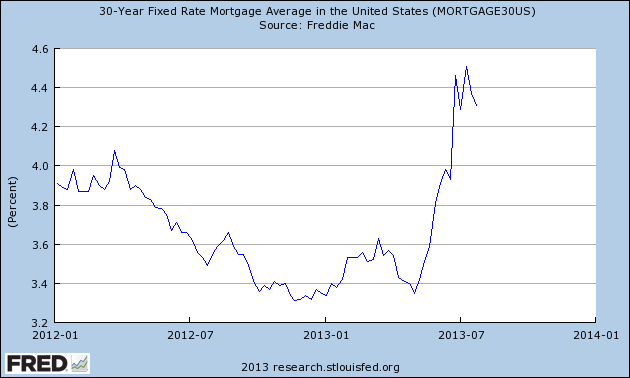 It should come as no surprise that this shock, ignited by fears that the Federal Reserve may soon begin to taper its support for the economy, has analysts and economists concerned that it will derail the ongoing housing recovery. As mortgage rates head higher, the effective prices of homes do as well. And as home prices head higher, fewer people can afford them. This is straight economics 101.

But we're seeing something totally different. In the first place, many of the nation's largest mortgage originators reported large increases in purchase-money mortgage activity during the second quarter. Volume at Wells Fargo (NYSE:WFC) was higher by 46% compared to the first quarter, while the same figure at JPMorgan Chase (NYSE:JPM) was up by 44%.

And in the second place, as we learned today, at least one industry participant is now forecasting that purchase-money mortgage originations will pick up more than originally forecast. According to the Mortgage Bankers Association, "Purchase loan originations during the second half of the year are expected to total $312 billion versus the $299 billion originally forecast."

At first glance, this doesn't make sense. How is it possible that the demand for mortgages will increase as the price does?

The answer is that, there's no reason at this point to assume that demand for purchase-money mortgages has increased. Indeed, if anything, the evidence seems to suggest, as one would assume, that it's decreased. Since the beginning of May, for example, the MBA's purchase-money mortgage index -- which tracks loan application volume -- has declined by roughly 10%.

What there is reason to believe, however, is that banks are now more inclined than they've been over the past few years to approve a greater share of new mortgage applications.

As rates bottomed out over the last two years, banks were inundated with applications to refinance existing homes. But as this trend has drawn back in the face of rising rates, so too have the profits that banks have come to expect from the mortgage operations. Consequently, they're now on the hunt for ways to replace this source, and purchase-money mortgages are a perfect substitute.

The point is that, for homebuilders like Toll Brothers (NYSE:TOL) and Hovnanian (NYSE:HOV), while the surge in mortgage rates may have first looked like a curse, it may very well end up being a blessing in disguise, as more people attain the resources necessary to buy their wares.