The global economy becomes more closely knit each year. The economic expansion of quickly developing countries requires resources to fuel the fire, and lots of them. The most efficient way to transport mass quantities of raw materials is through dry bulk shipping using large vessels. Assuming that teleportation devices won't be introduced anytime soon, the bulk shipping industry is here for the long haul.

Shipping services are all fairly standard: The materials are loaded, shipped, and unloaded. Therefore it is difficult for a company to differentiate itself based on quality of service, so other avenues such as rate competitiveness and cost efficiency become big factors in a company's success. A great example of a company doing just this is DryShips (NASDAQ:DRYS).

The good
Through what has been a difficult period for shipping stocks, DryShips has done a great job growing revenues. Over the past two years, revenues have been growing year over year at relatively high rates and have hit $319.7 million, a 29% increase over the same quarter last year. The fact that DryShips can maintain revenues during an imbalanced period of supply and demand gives the company a promising outlook. 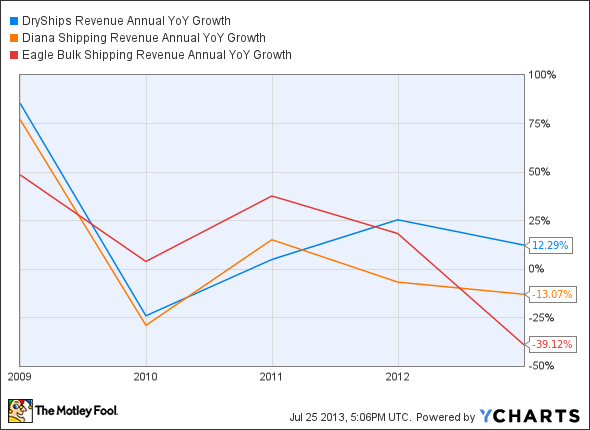 Furthermore, the shipping industry is cyclical, with the fall and winter seasons typically being busier. DryShips has seen steadily increasing days in deferred revenues, indicating that it has plenty of business coming in even during the spring and summer seasons. This is a very healthy sign since many other shipping companies are struggling or shutting down entirely during off-peak seasons.

A smooth operator
Just as DryShips is able to generate revenues during off-peak seasons, it is important for a company to be able to maintain healthy operating margins throughout the year. Another shipping company doing a good keeping these margins open despite lower revenues is Diana Shipping (NYSE:DSX). As seen in the chart above, revenues have been dwindling, but that does not mean management is not doing its part.

Although there is a steady downward trend, Diana Shipping is doing all that it can in the saturated market to keep operating margins positive while weathering the storm. The diminishing revenues are being combated with lower operating expenses as well, particularly during the off-peak seasons. The strategy now is to operate almost exclusively during peak seasons, which is different from the past where vessels were in constant operation to answer the high shipping demand. 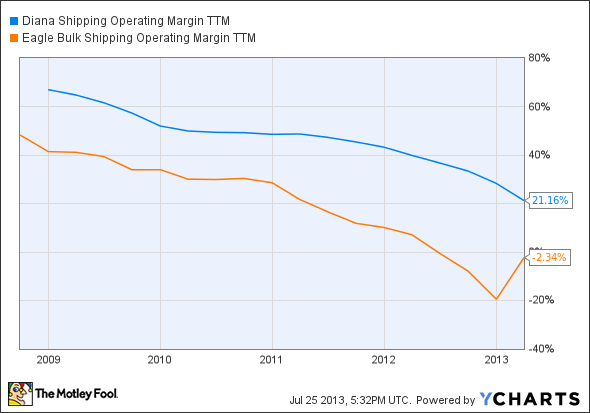 The current demand for shipping is being hurt by the slowing economies of China and India. With that in mind, Diana Shipping is focused on keeping costs low and exploring low-cost investments, such as acquiring new vessels. By adding to its fleet during an inexpensive time, Diana hopes to reward investors with extremely lucrative cash flows once the shipping business picks back up.

Shape up or ship out
The two companies above have done a relatively great job at staying proactive during a troubled time, and Eagle Bulk Shipping (NASDAQ:EGLE) is doing its best to follow suit. After putting up very strong earnings last quarter, reporting $72.2 million net revenue, compared with $52.6 million for the same quarter last year, Eagle looks to be on the right track.

Investors should also be aware of a drastic drop in Eagle's deferred revenues, which accompanied the increase in revenues last quarter as well. Deferred revenue is an indicator of how much work a company has to fulfill, and increasing numbers are usually healthy. The large drop in deferred revenue could indicate possible changes to revenue recognition and is a warning sign to keep an eye on.

Going up?
All of these stocks are at very low prices despite the fact that the market is at an all-time high. This is because the bulk shipping industry is seeing supply and demand factors that are severely out of order, which the industry is looking to correct in the near future. The Baltic Dry Index, a major indicator of the shipping industry, is currently just under 1,100, down from a high of 11,800 in May 2008. If demand follows current trends and picks up, these stocks could have a lot of room to run.