Let's start out with a chart that tells a story of its own. 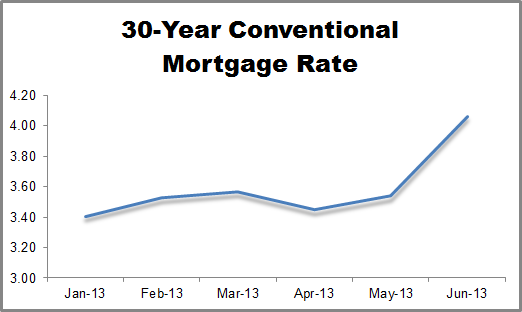 The sharp uptick in mortgage rates since the beginning of the year hasn't been music to the ears of folks who are either in the market to buy a home or haven't yet taken advantage of low rates to refinance older, higher-rate loans. But they're not the only group expected to squirm if rates continue to rise.

Bank investors have warily watched as the refinance boom has sputtered and mortgage applications have slid. The huge burst of refinance activity spurred by low interest rates has meant a nice bump for the fees that banks collect for originating mortgages and then selling them off to a third party like Fannie Mae. For that reason, a slowdown in originations would ding banks' bottom lines.

In its second-quarter conference call, Wells Fargo's (NYSE:WFC) management pointed to signs of just such a slowdown.

As rates rose late in the quarter, applications for home purchases remained strong but refi application volumes declined as expected. We still had a relatively large unclosed pipeline at the end of the quarter, but refi volume is obviously very sensitive to rates.

Over at Bank of America (NYSE:BAC), CFO Bruce Thompson further noted that the margins on those mortgage sales are also coming down.

While production has experienced a nice trajectory over the last year, we, not unlike the industry, have experienced compression on margins that affect revenue. While the margins do remain high relative to historical periods, the compression is most notable when you look at our year-over-year production revenue.

In other words, it sounds like investors could face a nice, old-fashioned double-whammy. There's a mighty big difference, though, between seeing profits soften a bit and having a change in environment cause a serious wobble in a bank's swagger. But before we jump to half-cocked conclusions, let's take a look at some of the evidence. 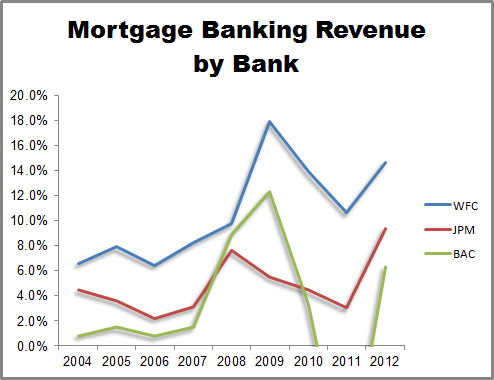 What this chart shows specifically is the percentage of each bank's revenue that came from mortgage banking.

You may notice that Bank of America's line falls off the face of the earth in 2011. The bank lost a considerable amount of money in its mortgage-banking operations in 2011 because of repurchase obligations -- that is, previous mortgage purchasers requied B of A to buy back mortgages that didn't meet the standards they were originally sold on. I set my chart to bottom out at zero rather than follow B of A south, because otherwise it makes the chart look terrible.

Bank of America's lousy 2011 aside, there are two things that leap out to me from this chart. First, mortgage banking income has been volatile for these three banks. Rather than any sort of smooth, clean, predictable line, the percentage of revenue coming from mortgage banking has bounced around. That's partially due to the health of the mortgage market and the banks' ability to originate and sell mortgages, but it's also due to servicing income. Included in mortgage-banking revenue is the gains (or losses) that the banks see on the portfolios of loans that they service. This can often move in the opposite direction from mortgage-sale revenue, because higher rates and fewer borrowers refinancing can actually benefit a bank's servicing portfolio.

The second aspect that jumps out from the chart is that mortgage banking revenue as a percentage of overall revenue in 2012 was considerably higher for all three banks than it was in 2004. Wells Fargo's went from 6.6% to 14.6%. JPMorgan Chase's (NYSE:JPM) jumped from 4.5% to 9.5%. And Bank of America saw its percentage leap from just 0.9% to 6.3%. And here we find the crux of the concern over higher mortgage rates and lower origination activity.

But while there's good reason to think that the contribution from mortgage banking will come down, there are a few reasons to stop short of dire predictions.

A balancing act
As I noted, within the mortgage-banking arms of these banks, it's not just a story of the production and sale of loans. Rising rates could benefit the servicing portfolios and offset some of the drop-off in mortgage sales. More importantly, we need to remember that there are many other businesses at the banks that may benefit while mortgage banking takes a breather. The core lending operations, for instance, have been hampered by the low rate environment as the spread between what the banks earn on their assets and loans versus what they pay for deposits and other funding sources has contracted. A higher rate environment could lead to wider spreads and more profit. Likewise, the improving economy that is at least partially responsible for the rise in mortgage rates is good for many of the banks' non-mortgage-banking businesses.

It's not all about refis
Higher rates may be depressing refinance activity, but as my colleague John Maxfield pointed out, it may not be as dire for the market for home purchase loans. In general, purchase activity has been depressed in comparison with refinance activity, and a resurgent housing market and improving economy could help it recover and pick up some of the slack from the drop in refis.

Market share gains
The increased reliance on mortgage-banking activity noted above isn't solely a result of the booming refi market. All three of the banks have expanded their mortgage-market share. In 2006, Countrywide, Wachovia, and Washington Mutual were all among the leaders in U.S. mortgage origination. Those three were acquired by B of A, Wells Fargo, and JPMorgan, respectively. Between those acquisitions, other lenders running into trouble, and work by those three banks -- Wells Fargo and JPMorgan in particular -- to increase their market share, these big banks are making more in mortgage banking because they simply control more of the market.

Worst-case scenario
We can, of course, also think in terms of worst-case scenarios. Consider JPMorgan in the middle of the pack, with roughly 10% of its revenue coming from mortgage banking. What if that all went away? For one, it would be only 10%, which smarts, but isn't a dire dip. However, the banks are also closely managing the costs in their mortgage-banking arms, so they're looking to slim down as demand wanes. So the hit to the banks' profits may be more muted.

But here's the catch. What applies to these three banks doesn't necessarily apply to all banks. Consider smaller banks HomeStreet (NASDAQ:HMST) and Waterstone Financial (NASDAQ:WSBF). At HomeStreet, gains on mortgage loan origination and sales and servicing income accounted for a whopping 76% of revenue over the first six months of the year. At Waterstone, 70% of first-quarter revenue came from mortgage-banking activities. For all of the concerns over the complexity of bigger banks, when we look at numbers like these, it's readily obvious why diversification of revenue streams is actually very beneficial.

In the end
Rates have risen. If you ask me, they'll continue to rise. Maybe not as quickly as they did between the first and second quarter, but with the economy continuing to mend and the Federal Reserve inching closer to reducing its monetary support, more buoyant rates shouldn't be terribly surprising. While there will be some definite pain points for all banks, it's important to understand the banks you're invested in well enough to know just how exposed they are to a downturn in mortgage banking.