It's not easy being green, just ask Kermit the Frog. This certainly is the case for an oil company, which would seem to be polar opposite of a "green" company. However, there is a surprising trend that has oil producers turning to green energy in order to extract more oil out of the ground. While this all might sound like one big oxymoron, solar panels really are helping to save Middle East oil, while having important implications on the American energy market.

On average, just 35% of the oil in a typical reservoir is usually recoverable. The rest of the oil stays unreachable with the hope that someday new technology will come along and unlock this trapped treasure. It's estimated that if the industry could recover just 1% more oil out of existing fields it would add 80 billion barrels to the world's proven oil reserves. For perspective, that would boost world oil reserves by 6%.

Needless to say, boosting recovery is important to the industry, which is why many are turning to enhanced oil recovery, or EOR methods in order to unlock more oil from legacy fields. Techniques such as water and steam flooding are now being used all over the world to boost oil production. However, steam flooding in particular requires natural gas to fuel a boiler in order to heat the steam which is then pumped down into an oil reservoir in order to push the oil to the surface as seen in the picture below: 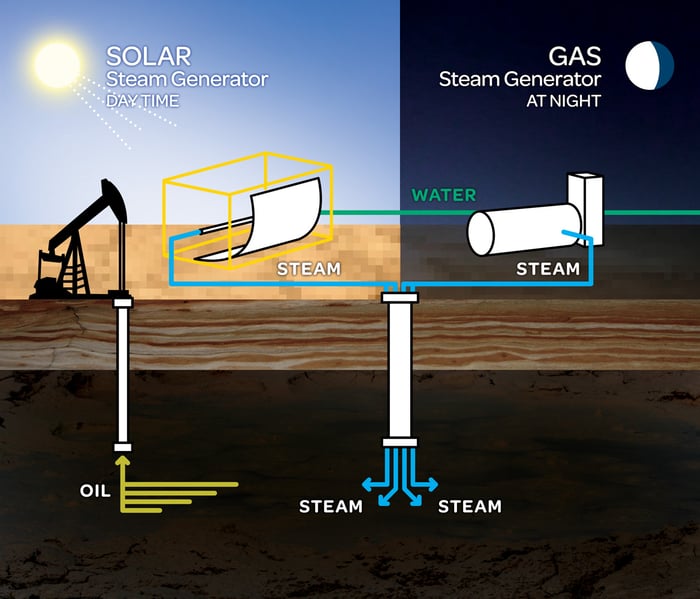 However, in an effort to save the valuable natural gas used in the process, producers are turning to solar-powered EOR technology from U.S. based Glass Point Solar. In fact, its technology is being used in Oman which has been struggling with declining oil production since the dawn of this new century. The project generates 50 tons of emissions-free steam each day, while also saving 47,000 BTUs of natural gas each year. This is helping the country not only produce more oil, but it can now sell that gas into the market instead of burning it to make steam.

Several global oil companies including Chevron (NYSE:CVX) and Shell (NYSE:RDS.A) are looking into projects to produce oil from solar. In Chevron's case, it launched a demonstration project to help determine the feasibility of using solar for EOR. It is now considering its next steps which could include using solar EOR in fields located in Kuwait and Saudi Arabia. In Shell's case, it went directly to the source and took a stake in Glass Point last year. It too is looking where best to apply the technology to increase production.

Enhancing the prospect of American energy independence
Glass Point's first project was actually in the U.S. with Berry Petroleum (NYSE: BRY) at its Sunset-Midway oil field. Berry, which is in the process of being acquired by LINN Energy (NASDAQ: LINE) is using enhanced oil recovery methods to extract more oil out of its legacy fields. Part of its attraction to LINN Energy is this legacy production as well as its expertise in EOR methods. As an MLP, LINN's strategy is to acquire mature fields and increase production at those fields in order to use the profits to fund its distribution. The company took a small stake in an EOR project last year to gain expertise so that it can eventually transfer what it has learned to its legacy fields. Adding the knowledge gain from Berry on solar could also be applied elsewhere in its portfolio to increase oil production.

EOR projects aren't the only place that solar is being used on the oil field. Halliburton (NYSE:HAL) is using solar panels on its new SandCastle Vertical Storage System for proppants. The system, which is part of its "Frac of the Future" initiative has a two-fold purpose. First, it's reducing its carbon footprint by eliminating the need for diesel to power the engine, and second, by going vertical it's reducing the physical footprint on the well-pad.

Final Foolish thoughts
Energy companies are really making a concerted effort to use green technologies to develop oil and gas fields. Not only is this saving producers money, but it's enabling them to sell instead of burn their production, which is helping to boost margins.  I guess it goes to show that Kermit the Frog was wrong, it actually can be easy to be green.