Ford (NYSE:F) has a big year coming up in 2014. The company will launch next-generation designs of its body and soul -- the Mustang and F-150.

Ford sits between a rock and a hard place when approaching the redesign of its iconic muscle car, as sales of the Mustang have crashed and haven't been able to regain much momentum. This will be Ford's attempt to kill the retro styling and bring the car into the 21st century as a lighter and faster sports car. 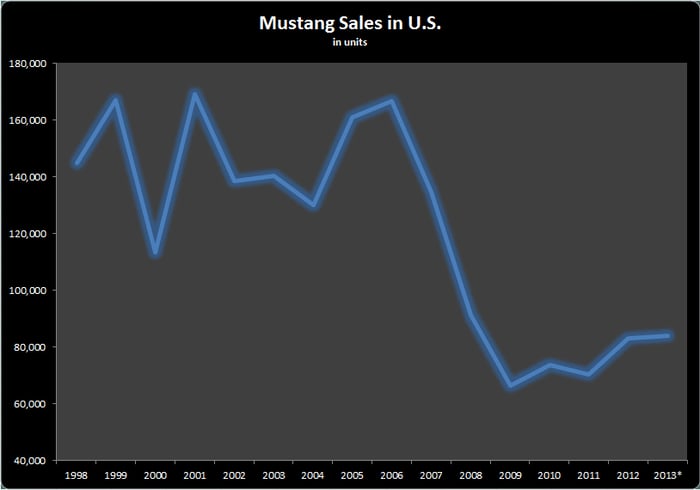 In addition to reviving sales in the U.S., Ford needs to expand its sales to the global market -- a tough balancing act.

"Ford wants the car to appeal to a global market, but the last time the company tried to make a global Mustang, we ended up with the Ford Probe," Andrew Stoy, digital editor of Autoweek, told me. "Any time a halo vehicle as quintessentially American as the Mustang is re-engineered for broader markets, the risk of alienating the car's core audience rises. That risk is even more acute in the face of the Mustang's strong domestic competition -- namely the Chevy Camaro."

Stoy hit the nail on the head. Ford has to avoid the worst-case scenario of losing its core U.S. consumer with a modern design, yet if it doesn't evolve enough to appeal to a new global audience, it will fall short of Ford's sales ambition.

Simply put: For the Mustang to succeed overseas, it needs to shed a few hundred pounds and shrink in size.

'Stang on a diet?
The current Ford Mustang weighs in at 3,523 pounds, and according to Edmunds, Ford is working with lighter materials to remove a minimum of 400 pounds for the 2015 model. To provide the smaller vehicle necessary to sell overseas, it's believed the next-generation Mustang will be as much as 15 inches shorter and 6 inches narrower.

For those worried that the weight loss will make the muscle car any less "Ford tough," there's nothing to worry about. "They are going to use more aluminum, better structural engineering in terms of spot welds, and so on and so forth, basically using less material and making it stronger," an unnamed source said, according to Edmunds.

There are rumors that the Mustang will receive an EcoBoost engine, which left some 'Stang loyalists puzzled and anxious. I doubt there is anything to worry about, as Ford has a lot of engine flexibility that will help it sell well here in the U.S. and overseas. A turbocharged EcoBoost would help sell the muscle car in Europe, while the power-hungry U.S. consumer will no doubt have a top-of-the-line V-8 option. Also to the delight of U.S. loyalists, the pony car will finally kick the live rear axle in favor of an independent rear suspension.

Investing takeaway
Ford's had an excellent run of success with vehicle sales lately, and that's helped boost Ford's stock price up 70% over the past 12 months, as of this writing. Ford set a July record for sales in China, topping over 72,000 in wholesale units -- good for a 71% gain over last year. Ford's year-to-date sales are up a staggering 50% in China through July versus last year. Ford is also increasing its market share in Europe amid an industry still in decline -- pretty impressive.

That recent success is due to the Fusion, Fiesta, Focus and Escape, which continue to sell well globally. Ford now looks to bring its Mustang to the global lineup in hopes it will bring yet another surge in sales and market share.

One thing is for sure: Ford is on a hot streak of designing successful vehicles, and that's brought the company back strong from the brink of bankruptcy. For that reason, I expect the 2015 Mustang to be yet another hit here, and abroad -- much to the delight of Mustang loyalists and investors alike.