When someone talks about "the new normal," we assume that it denotes a new permanence that will dictate things for the rest of time. But we live in a dynamic society that's constantly changing, so that "new normal" could be the normal for but a brief moment.

In America's energy landscape, the use of pad drilling has changed the way we explore for oil and gas, and this fundamental shift has consequences across the entire industry. So let's look at this practice that's the "new normal" for now, as well as how it affects the industry and what it means for investors.

Pad-ing the bottom line
Pad drilling is what you could call horizontal drilling's smarter cousin. Rather than drill a single horizontal well at a site, the way the industry did just a few years ago, we're now seeing companies drill several wells from the same pad to target a shale play more effectively, save time, and conserve money. 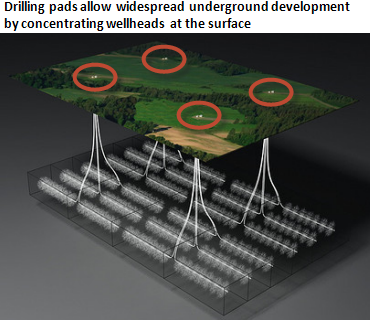 Pad drilling is proving itself very useful in places such as North Dakota, where there are multiple layers of shale over a single site. Continental Resources (NYSE:CLR) has indicated that some of its drilling operations are completing as many as 14 wells per pad to target both the Bakken and Three Forks formations simultaneously, and it's looking to bump that number to above 20 for certain sites.

For producers such as Continental, the results of pad drilling are easy to see in the bottom line. A year ago, a single completed well for the company cost $9.3 million. Contrast that with the average cost of a completed well in that same region, which is expected to be below $8 million by the end of the year. With a drilling plan of 110 net wells in 2013, the savings of about $140 million per year means fewer capital expenditures for each barrel of oil. So exploration and production companies can either ramp up their drilling programs to increase production faster, or enjoy the higher margins.

The ripple effect
With so much more activity occurring at a single site all at once, exploration and production companies are requiring less equipment and contractors to get the job done. Despite a large uptick in oil production between the middle of last year and today, total rigs drilling for oil have remained relatively flat. 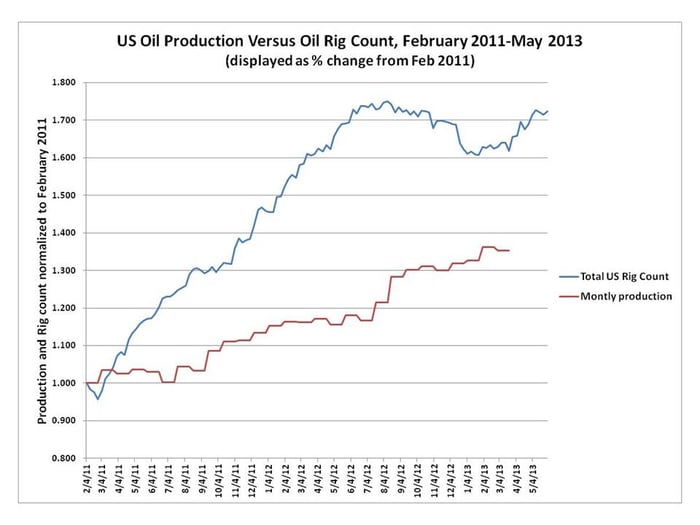 It is very likely this trend of flat rig count to production will continue for some time, because there is still lots of room for pad drilling to grow. According to Halliburton (NYSE:HAL), only 50% of all wells drilled in the U.S. today are done on pads, and the gains made in some of the more innovative regions, such as the Eagle Ford and Bakken, will spread to other places. That means Halliburton and its competitors are looking to ramp up operations overseas as well as focus more on other services such as pressure pumping to make up for fewer rig-related services.

So not only is this creating a revolution for exploration and production companies, but it's also rapidly changing the dynamics for rig owners. For rigs to be pad-capable, they need to be able to move a few feet to the new well site without being disassembled and reassembled. So we're seeing a large turnover from the traditional rig to these new pad-capable rigs. Nabors (NYSE:NBR) provides a great example. The company has only a 40% utilization rate for its legacy rigs, but its pad-capable rigs have a 91% utilization rate and a much larger market share than its overall rig market share. 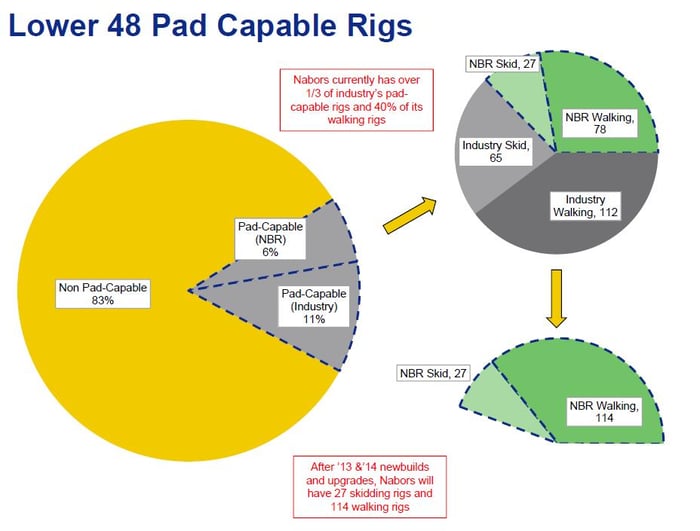 These higher-technology rigs also command a 20% price premium, but the problem today is that rig companies simply have too many legacy rigs on their books that drag on earnings. So for the next couple years, rig companies' bottom lines will suffer as they turn over their assets. This trend will slow as pad-capable rigs become a larger part of the overall fleet.

What a Fool believes
The implementation of pad drilling will be a welcomed help for investors in the exploration and production space, especially those in the natural gas game. Ultra Petroleum (NYSE: UPL) suffered mightily in 2012 because of low natural gas prices, but the incorporation of techniques such as pad drilling has enabled the company to get drilling costs down low enough that its natural gas breakeven cost on current wells is $2.88. These kinds of cost efficiencies are necessary, considering the massive capital expenditures these E&P companies are considering over the next several years.

For those in the oil services, this shakeup will more than likely take a year or so for companies to adjust their services to more accurately reflect the needs of the industry in the United States. For the time being, companies such as Halliburton and Nabors will look to move several of its legacy assets to other parts of the globe, where they may be able to milk a few more years out of the equipment. Eventually, though, these international customers' thirst for pad-capable equipment and services will require a migration of the new technology as well.