The Dow Jones Industrial Average is bouncing back today after sliding last week -- but its rebound might not last. Last week, we saw weaker-than-expected quarterly reports from multiple retailers, while new home sales came in 13.4% lower in July from June. This week, orders for durable goods declined by 7.3%. And as tensions in Syria rise, anxious investors may prompt the market to resume its slide. However, any market pullback could give savvy investors an opportunity to pick up compelling companies at a cheaper price. Here are two companies, both poised for a bright long-term future, that savvy investors should watch closely.

Flying high
Boeing
(NYSE:BA) Despite negative headlines and budget problems regarding its 787 Dreamliner, Boeing's stock price has soared roughly 38% this year. Right now, Boeing trades at about the same P/E ratio as the industry average -- but I believe Boeing should trade at a premium compared to its industry, for two reasons.

First, the company operates in a market duopoly with Airbus EAD, and potential new rivals in its sector face high barriers to entry. Also, Boeing has a $410 billion backlog of orders -- worth about 4.5 times its full 2013 sales estimate -- which provides transparent and sustainable revenue going forward, even during rough patches.

Second, investors often overlook that Boeing requires its CEO and all senior management to maintain stock ownership of three to six times the value of their annual base salary, according to Morningstar. That's great for investors, who can rest assured that management's incentives are aligned with shareholders'.

Bears will likely point out that defense spending cuts by the U.S. government could continue over the next five years. While that's true, Boeing's commercial operations generate nearly two-thirds of the company's earnings, and have enough growth potential to offset any drag on its defense segment. Boeing recently raised its global commercial aircraft demand guidance to 35,000 units over the next two decades, which translates to roughly $4.8 trillion in potential revenue.

If we see a market pullback, you may have a chance to jump aboard with a company that has a huge backlog of orders for secured revenue and has management's interests aligned with shareholders' – all at a fair stock price.

Speeding along
Ford (NYSE:F) has had an excellent year for U.S. sales, especially in its most profitable segment, full-size pickups. There, its F-Series remains the best-selling vehicle for 31 years in a row. This is even more important when you consider that transaction prices for that class of vehicle are increasing more rapidly than in the overall industry, boosting Ford's revenues faster. 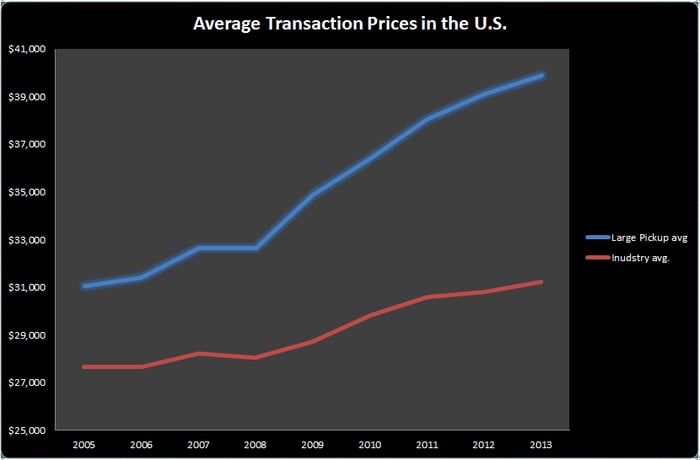 Ford has also witnessed a huge improvement in China, where it plans to double its market share from 3% to 6% by 2015. Year-to-date sales in the region are up 50% versus last year and should continue to increase; the company plans to launch an additional 15 models by 2015.

In other news overseas, losses in Europe, which have been a drag on the company's earnings for years, are narrowing. Ford recently reduced guidance for its 2013 losses in the region to $1.8 billion, down from $2 billion this year – a small yet great development that investors hope marks the bottom of Ford's losses in the region.

Even better, Ford increased its wholesale volume, market share, revenues, pre-tax profits, and operating margins in Europe, even as the overall market continued its decline. Ford still reiterates its goal to completely break even or turn a profit in the region by 2015.

Ford's share price has taken a breather in August after surging roughly 70% over the last year, and the company tends to drop further when macroeconomic fears stir up. If this happens, it will provide an excellent chance to buy into a company with an industry-leading management team and numerous positive catalysts that could come to fruition by 2015.